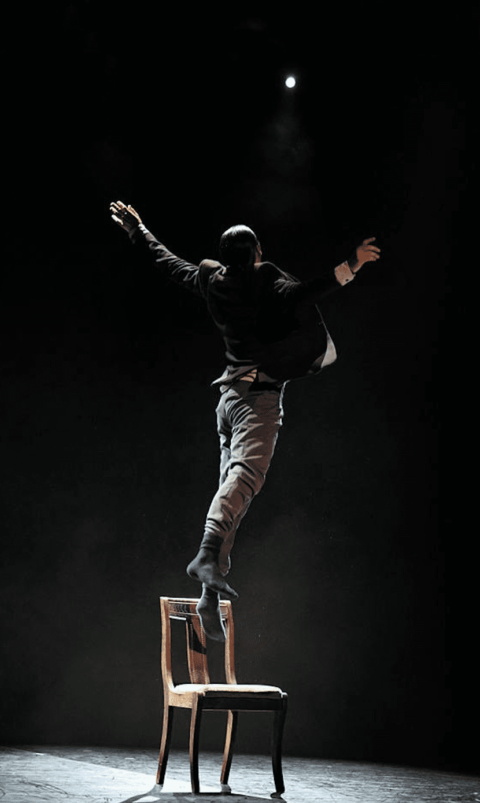 When Antonio Gil Pérez had the accident he saw a light. A blinding flash that, he did not know then, was the announcement of his new life situation. He was paraplegic, and every disabled person carries a double burden. His own and that of the one who has to take care of him. Mario Bermúdez has thought a lot about this, watching his mother take care of his uncle Antonio Gil. And for a long time he has wanted to express this story artistically, which is that of his mother, his uncle, his environment and his own, but also that of so many other relatives of someone with a disability.

As he is a choreographer, he cannot think of any other way to tell this story other than through dance, even if it is the first time that his company Marcat Dance has moved away from suggestions and evocations to face such a specific, close story. Huesos de Madera, which has its antecedent in the short piece Wooden Bones (2016), wants to draw attention to the silent act of sacrifice and generosity of the caregiver. What it implies, what it signifies, what almost no one sees because the tragedy of the ill-fated has greater impact and visibility. It also wants to be a heartfelt tribute to so many disabled people and their caregivers.

As in all the creations of his company, the dramaturgy of Huesos de Madera is his own, but this time, due to the emotional closeness to the subject, he wanted to have an external eye to guide him through this labyrinth of emotions that make up a more intimate choreographic material. And this is how the veteran dancer and choreographer Isabel Vázquez, Bermudez´s teacher from another time, has joined the team.

The work will be interpreted by Bermúdez himself and his dancer Marilisa Gallicchio, but not as protagonists because there are two more on stage: the pianist Esteban Ocaña, always immobile playing his grand piano; and a chair, which transcends its condition of props to become a relevant part of the narrative –  the unmistakable symbol of prostration and immobility. There is also the light, the imitation of that flash that forever changed Uncle Antonio’s life before and after.

Far from the position of musical accompanist and not at all exercising his role as a pianist for dance, Esteban Ocaña will perform live well-known and recognized works of the universal repertoire, all with a strong emotional charge that is responsible for the atmosphere and tone of the piece. Bach, Händel, Rachmaninov or Beethoven and their emotional Moonlight, which has a relevant moment, will lend their melancholic beauty to the choreography.

Marcat Dance is the artistic home for Spanish Choreographer and former Batsheva Dance Company Member Mario Bermudez Gil and co-founder Catherine Coury. Founded in 2016, Marcat Dance is dedicated to sharing our creativity and joy of movement through creation, performance, and teaching opportunities around the world. Marcat Dance believes in the power of the imagination, creative risk-taking, and continuous research towards dynamic physicality. Marcat Dance connects to the human spirit and finds inspiration from world cultures, rituals, and landscapes.  Marcat repertory has been performed across the Middle East, ...
+ info