An easy way to end it all Maria M. Cabeza de Vaca 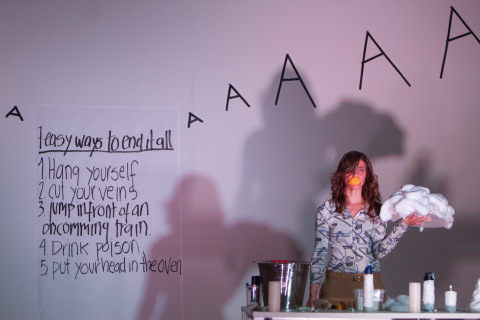 “An easy way to end it all” is a humorous solo-dance performance that reflects on the sense of existence.

“7 easy ways of end it all”, a brief writing by the artist Louise Bourgeois, has inspired this performance.  Louise’s writing deals with suicide and uses the concept of “end” recurrently both in the actual performance and the background plot. The concept of “end” is not regarded as a definitive way of ending it all but as a much needed requirement to end life stages and as a “driver of change”.

It is an optimistic performance about important, powerful, stormy, self-destructive and even electrical turning points in anyone’s life which involve breaking, trashing, cutting, vandalizing… and which can lead to change, when properly dealt with.  In other words, it is about the necessity to reinvent oneself and to keep on struggling.

In this new project I have put my mind to exploring and blurring the limits of performing and I would like to be on the frontier between “acting and theatre” and “performing arts”, mixing plastic arts, dance and drama.

I place this work between obscurity and farce, tragedy and comedy, treading on a slippery and conflicting ground.  And I am trying to find  the “transcendence of lightness” and the “lightness of transcendence”, and again, like in previous performances, I use “stupidity” as an intelligent way of facing this topic.

María M. Cabeza de Vaca is a contemporary dancer and a choreographer.  She graduated in Spanish Philology and in Classical ballet.  She was trained as a contemporary dancer in the CAD (Andalusian Academy of  Dance). She has developed her career as a performing artist in dance and theatre companies such as:  “Provisional Danza” (Madrid), “La Imperdible” (Sevilla), “La Permanente” (Sevilla), “Metros” (Barcelona), “Erre que erre” (Barcelona)… In June 2001 she carried out her first dance work for the opening day of the International Dance Festival of  Itálica.  She has continued her career ...
+ info