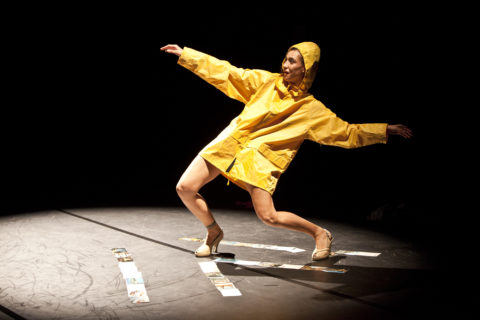 This piece reflects on day dreaming and accomplishing or not the dreams. It also deals with the fears we need to cope in order to achieve our goals, and the anxiety this leads to. Finally it allows a peek into the pleasure of accomplished dreams. All this happens surrounded by an interesting soundscape that is created by the dancers movement and some collaborators from the audience. She’s wearing asensor that will generate several sounds, and the volunteering audience can also generate sound by connecting their smartphones to the computer. One of the volunteers, instead of making sound, will change the ambient colour. Some other people sitting on the audience will have their voice recorded during the welcome wine, whilst reading postcards. Their voices will also be part of the “Travelling to Nowhere” soundtrack.

“… An imaginative narration plenty of freshness and talent, ”
“… an exquisite dancistic and theatrical play which achieves in full what it pretends to: getting the audience to travel to an unknown, abstract terrain, shared by everyone, that “nowhere” where every piece of art should carry us.” Sevilla,  November 7th,  2015

“…an extraordinary and incredibly thrilling show…”
“…So it was a bath in alternating emotions and lots of material to think about. It is not surprising that the audience, after thanking Catalina Carrasco with a long applause for the radical, intelligently thought and excellently interpreted choreography and Gaspar Morey for his genial participation, remained seated for several minutes on their seats.” July 10th, 2015