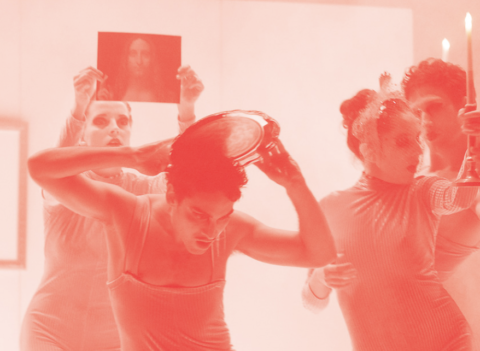 “… and I awoke with a start, as through face

to face with a sudden insidious danger, as

though in the darkness my hands had touched the ice-cold skin of a reptile.”

Report on the Blind (On Heroes and Tombs) Ernesto Sábato

Are we blind? The Lamb departs from a miraculous event, the recovery of eyesight, only to immerse us into a blinding experience. There, heaven, hell, and purgatory are difficult to tell apart, and such is the case with a brothel where fiery bodies exert strange rituals, and where the roles of victim and executioner are interchangeable. In this world, we have to close the eyes for a second time in order to wake up.

The Lamb turns to dance as the means to question the contemporary spectator about the current situation.

The poetry of the body is used as a path to knowledge by the new Spanish-Italian company Kor’sia. They face up to some big philosophical questions through contemporary dance such as “who am I?”, “where do I come from?” and “where am I going?”.

Kor’sia’s proposals are fulfilling performances where

the choreography inhabits disturbing and captivating

Utilising the body as a metaphor of thought, the piece takes on topics from universal arts, such as the relationship between blindness and sightedness, sacrifice as a poetic act, or life as an illusionary or dreamlike condition.

We may consider the fourth song from the Inferno in Dante’s Divine Comedy:

“Now let us to the blind world there beneath descend,”
the bard began, all pale of look:
“I go the first, and thou shalt follow next.”

The origin of the choreographers Mattia Russo and Antonio de Rosa, as well as their artistic interests linked to dance, are noticed in their tributes to Pasolini because The Lamb also reunites the forbidden and sacred, or to Fellini, the inspiration for their irreverent sense of humour..

The music by Johan Sebastian Bach perfectly suits the thematic universe of the Lamb. It was said about Bach’s music that it was an act of resistance against the separation of the sacred and the profane. Nonetheless, by being true to the eclecticism and baroque taste, notable in the sumptuous wardrobe by Palomo Spain, Kor’sia proposes a sound experience where classicism and electroacoustics come together.