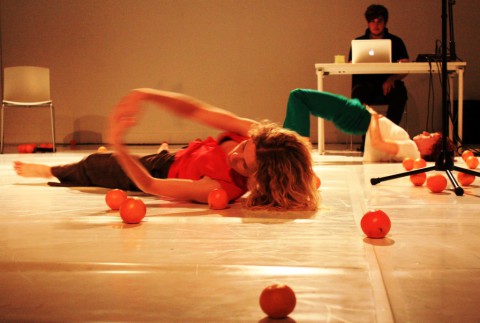 “Ten thousand false thoughts” is the second production of the collective La Casquería.

“Ten thousand false thoughts” is a contemporary dance play conceived for stage areas as well as for singular spaces. It provides, therefore, a flexible offer that can be brought to the public in multiple ways.

It has a duration of 50 minutes.

When I was growing up in California there were two things that everyone assumed were good for you. There were, of course, others – spinach and oatmeal, for instance – but right now I’m thinking of sunshine and orange juice.

When we lived at Ocean Park, I was sent out every morning to the beach where I spent the day building rolly-coasters in the sand, complicated downhill tracks with tunnels and inclines upon which I rolled a small hard rubber ball.

Every day toward noon I fainted because the sun was too much for me. When I fainted I didn’t fall down, but I couldn’t see; there were flocks of black spots wherever I looked.

I soon learned to find my way in that blindness to a hamburger stand where I’d ask for something to eat. Sitting in the shade, I’d come to. It took me much longer, about thirty-five years in fact, to learn that orange juice was not good for me either.