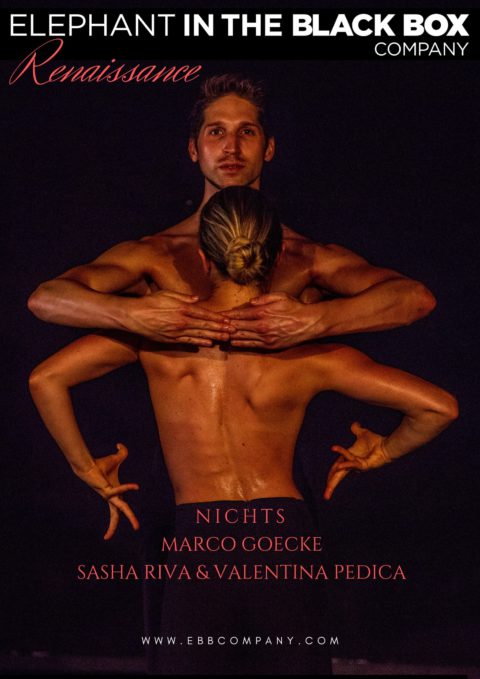 The new poetry of the body, the unspeakable, the invisible, emotions and memories brings Jean-Philippe Dury and Marco Goecke together for the first time in this double bill program Renaissance.

With this performance, Dury returns back to his artistic past, his eclecticism, and gets carried away by his unique sense of aesthetics. Renaissance maintains a pure neoclassical body dramaturgy keeping an open dialogue with other art forms and choreographic language with the purpose of bringing a unique sense of today’s dance to audiences worldwide.

Dury’s The Hidden Beauty revisits the tale of Sleeping Beauty and turns the story around into a playful and dreamlike choreography. In Nichts, Marco Goecke make us travel through his emotional universe with his unique language on Jimi Hendrix and Keith Jarret’s compositions.

With the support of seven well experienced and highly skilled international dancers, Elephant in the Black Box consolidates its way of delivering excellence to international venues. The result is a show that shines through a high artistic level of execution.

Germany has been watching Marco Goecke’s work since the early 2000s, when he began his choreographic career with Nijinsky. Sixty creations are now part of his repertoire, yet he keeps creating new works for other international companies.

Marco now collaborates with EBB bringing his 2009 creation Nichts. Nichts was created for the talented dancers of NDT 2, on the music by Keith Jarrett and Jimi Hendrix. The body and its movement become poetic instruments of a revealed ontology that seems to have been created in another world. A work that questions the impact of emotion on movement. Pure dance that reconciles elegance with a passionate discourse full of images that lets the audience complete the meanings.

In 1988, Marco Goecke completed his ballet studies at the Stiftung Heinz-Bosl Ballet Academy in Munich, but graduated from the Conservatory in The Hague in 1995. He then collaborated with the Deutschen Oper Berlin and the Theater Hagen, Goecke produced his first choreography in 2000.

Since then, Goecke has been one of the most sought-after choreographers in the world due to his unique movement language. Goecke’s work is carried out by dance companies from all over the world. Since 2005, Goecke has been choreographer in residence at Stuttgart Ballet, between 2006 and 2011 with Scapino Ballet Rotterdam and, since 2013, he has also been associated choreographer at Nederlands Dans Theater.

Over the past ten years, he has created more than forty choreographies, including two full evening performances The Nutcracker and Orlando for the Stuttgart Ballet. Goecke has also created for the Ballets de Monte-Carlo, the Hamburg Ballet, the Pacific Northwest Ballet in Seattle, the Nederlands Theatre Dans Theatre, the National Ballet of Norway, the Leipzig Ballet and the Zurich Ballet.

In the story of The Sleeping Beauty, a young princess sleeps for a hundred years hidden in a palace. The vegetation of the forest prevents anyone from approaching.

Starting from this idea, the choreographer Jean Philippe Dury remakes the story wondering how much hidden beauty is waiting to be discovered. Thus, he develops a fresh, youthful and passionate entertainment where there are as many “Sleeping Beauty” as people is dancing. The public does not know who the princess is and who the prince is. Who is sleeping or who is awake.

This choreographic creation presents a game of duets, solos and choral moments where the dancers appear and disappear, hiding their beauty or showing it. Based on the musical version of Gavin Briars on the homonymous ballet composed by Tchaikovsky in 1890, Jean Philippe Dury eliminates the conflict between good and evil.

In the choreography done by Petipa the ballet’s focus was undeniably on the two main conflicting forces of good, the Lilac Fairy, and evil, Carabosse. Both characters correspond to two musical themes repeated in the prologue and the first two acts of the ballet.
Dury uses references to the enchantment transmitted by the spindle of weaving, but in its version, it is rather an approach to the psychological interpretation of the awakening to sexuality and adult life. The Hidden Beauty is a work where dancers move like elves in a magical forest.

During the 2003-2004 season, Dury briefly joins Les Ballets de Monte-Carlo for one year before returning to Paris Opera Ballet as a main dancer.

In September 2007, Jean-Philippe joins Spanish’ Compañía Nacional de Danza with artistic director and choreographer Nacho Duato. In 2009, Gradimir Pankov invites Jean-Philippe to join Les Grands Ballets Canadiens in Montréal for one season before returning to Compañía Nacional de Dance for one last season. His journey as an artistic director, choreographer and entrepreneur was just about to take off.

It is very early in Paris where Jean-Philippe feels the first urge to choreograph and create his own performances. He began in Paris Opera Ballet company with choreographies including Fado (1999), Vidalita (2001), Háblame (2003) or Les Jardins du Silence (2006). Later on he worked for Leipzig Ballet, Ballet Basel, Ilicite Company, Compañía Nacional de Danza creating a number of works some of which keep coming back yearly in their repertoire season nowadays. Dury is an innovative and audacious creator that pushes the boundaries of interpretation and technique. His own choreographic language positions Jean-Philippe as one of today’s most dynamic modern dance creators.

A dance company from the XXI century became Jean-Philippe’s purpose after Compañía Nacional de Danza. That is why in 2013, Jean Philippe decides to launch in Madrid Elephant in The Black Box, contributing to the international dance scene with a fresh and renewed artistic vision for dance. He envisioned a company that could allow him and other international choreographers to break the rules through excellence and talent and where he could support the dissemination of their values through the set up of their works.

Since then, his work as a choreographer and director has been recognized by different festivals, organisations and choreographic competitions including Talent Madrid Festival with his latest creation Cel Black Day.

Shortly after EBB’s debut, Dury begins an integral project for dance and youth in Madrid with the purpose of facilitating international young dancers their transition from education into the professional dance field. Jean-Philippe soon realized the necessity to empower young talents through ongoing formation, stage practice and assistance in their mobility across the world.

Elephant in the Black Box is directed by the choreographer and dancer Jean-Philippe Dury. Founded in 2013, the company is formed by a group of dance artists coming from different countries and prestigious companies. Elegance, precision, fluidity and excellence are EBB's trade beside the wish to explore contemporary themes. EBB is a comprehensive and a international project focused in three main points: artistic education, young dancers professional integration and the development of a professional company promoting creativity, talent and cultural diversity. This is specified ...
+ info