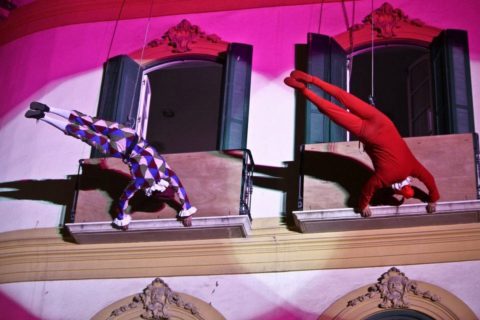 This show takes a tour through the most significant periods of Picasso’s work , giving life to the characters and items created by him. The performance is staged in key vertical aerial – acrobatic dance . Four dancers fly over the wall , making a living canvas. A plastic and musical pairing with music by Granados, Satie , Debussy and Stravinsky. Music awakens the strokes of the painter and dance brings to life the characters in the pictures. Rea combines fine arts and dance in the same plane in which a painting is conceived , in the vertical plane , thus giving the possibility to the characters of flying and dancing on the air, just as they would do in the painter’s imagination . Picasso hanging on a rope and dance Pending Picasso.

The blue period gives its name almost predominant use of blue tones and is characterized by a pessimistic themed sign. Human misery , loneliness and marginalization are represented by elongated figures .
Light blue stains the front of the building making the languid , elongated characters in a song of melancholy and evocative reflection of sadness and despair and cold society. Contemporary dance is the leitmotif and the language in this period, which applied to the vertical dance brings us to the feelings that the artist wanted to provoke us with the paintings of this time is represented .

Rose period happens when the artist settled permanently in Paris, is a vital time in their color and in the circus theme predominates .
The light pink ink bringing a warm , welcoming atmosphere vital and adorned by characters from the world of circus acrobats , harlequins , etc … The circus cast takes us to this period with acrobatic choreography and somersaults own circus acts . Despite the nostalgic looks of the characters in the pictures, Rea dance is carried away by the color and the comic grotesque attitude while these .

ART IS A LIE . Picasso

It breaks the perspective and principles of light and shadow creates a new perception of reality. At this point in the scene there is a certain color, are different colorful us the draw. Are female characters, with colorful dresses and hats, who dare to sit in the chairs of this canvas, so that its canons and principles of female beauty are destroyed, renewed and arranged arbitrarily according to the intention of the painter . This period will dance using chairs as a theatrical element and part of the choreography. The chair as a symbolic element , is where women dance , and pose for pictures .

Picasso’s life was spent in an era and countries where war erupted on several occasions, the closest to the painter was the Spanish Civil War. In 1937 this event was inspired by painted Guernica mural narrating the bombardment of the city and for whose realization outlined 60 preparatory sketches. This picture is dedicated a scene for their importance and significance in the author’s work . To recreate the space painted with monochromatic lights and evocations of the characters in the picture ( horse , bull , dove, Burning Man … ) enter the scene where fire takes center stage , fictitious fires and lamps make the scenes that immerse us in Guernica . The dance stained tears and panic take us into the atmosphere of the bombing , no color , only the darkness of a gray scale terrifying .

In recent years, the artist had a stage devoted to ceramics , which like the sculpture are essential and important part of his work. This scene is the painter who is painting comes to life and the other characters in plates and bowls , is at this time when the protagonists meet each period and make Picasso’s universe completely, in its entirety. The bull, the Minotaur and doves dance to get the brush stroke of Picasso. It is a scene of reconciliation between the author and his work, and especially between Picasso and the world. The graceful and free movement of the pigeons that flutter around the painter ‘s work closes with a global outlook of the world and life of the artist .