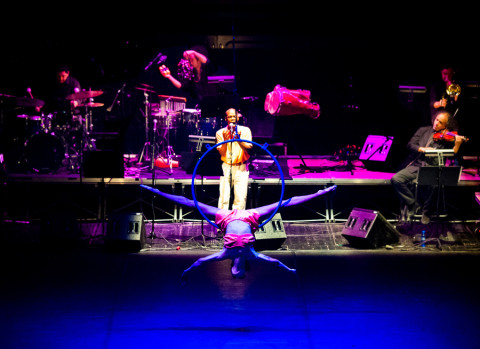 The atmosphere of a 1940s Cuban Club in New York City is the point of departure and context for the setting of the show NY Story. The club guests are dancing, breathing and interacting to the rhythm of Latin Jazz. NY story is created and produced by Oscar Gomez, with Dani Pannullo as the artistic and choreographic director, and Pepe Rivero in charge of the music.

The performance is structured into 15 scenes each divided by the musical score and narratively strung together as a ‘Romeo and Juliet’-type love story in which the audience will easily identify with each character. NY Story is presented as a choreographed concert taking you on a journey through the realms of Latin Jazz.

“It occurred to me to place the story for this project in a Cuban club from the 1940s, so that I could tell some of the things that have always happened in such a dancehall. These gangs of different origin and the interaction between them are portrayed through the music and dancing” says Dani Pannullo, artistic and choreographic director of the show.

In this sense, NY story could very well be a showcase for this Argentine born longtime Spanish citizen, known for mixing a variety of disciplines in his search of what he calls a ‘total performance’.

Ten dancers from different stylistic backgrounds selected from an audition at the Canal Dance Centre are a tribute to the varieties of dance expression that can be performed on stage. Contemporary dance, Latin dances, circus stunts, and even those very urban dances so characteristic of Dani Pannullo’s choreography since his beginning, are represented in NY Story.

“The vast majority of the first break dancers were latinos and it was not unusual for them to be performing to the rhythm of Latin Jazz in their daily battles,” the choreographer explains.

Together with the ten dancers, there will also be ten musicians and three singers on stage. They will be conducted by composer and pianist Pepe Rivero, the musical director and also one of the performers in the show.

With so many people sharing the stage, the scene is definitely set for a great Latin Jazz experience travelling back and forth between dance and music in this NY story.

“When a dance show is so fortunate as to be accompanied by live music, the orchestra, or band in this case, is normally situated in the pit. We are going to share the stage with the dancers and that will be very exciting for the musicians as well as for the audience. A true artistic communion,” Pepe Rivero points out.

As writer of the score, Pepe Rivero has chiefly included his own compositions in this play, but has also embraced versions of classics from Latin American music.