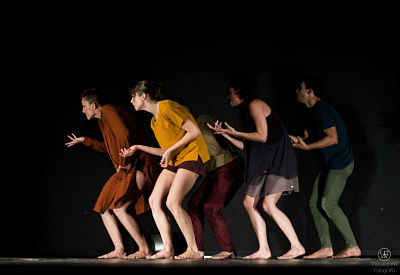 In Noiseless, the drawing body becomes a vehicule and by force of emotions tells us about the struggle of humans to reach the balance. About their fragility.

The movement tangles and untangles, repressing and releasing, raising and dragging. Six performers trying to reconcile their own life, defending themselves and figthing without renouncing to their dignity. Being strong and vulnerable at the same time, capable to fight and cry, ready to be touched.

Dance leeds the speech with a refined vocabulary which invites to make connections, to empathise, to identify and to be carried along.

Refuges that break the borders, embracing me.

in the middle of the ocean,

moving the clock´s hands, despite the time.

Standing, I walk, sometimes I shout,

some others I sing to led myself

holding my voice in the twilight.


Contemporary Dance piece with six performers and one hour length. Suitable for all audiences.