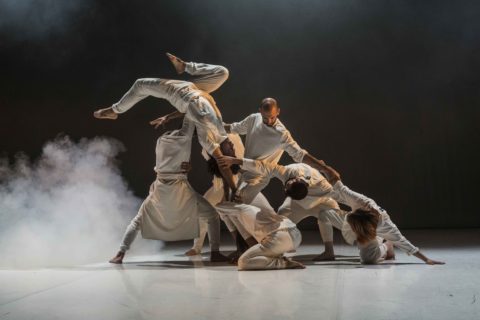 No sin mis huesos (2016) is a dance piece conceived of as a commemoration to the 400 year anniversary of Miguel de Cervantes’ death (April 1616). In the work, Iron Skulls Co. revisits the writer’s biography and draws inspiration from his history. Moreover, they contemplate the socio-political context of Spain during the Golden Age, from which they draw out primary concepts for their creation, including religion and military service.

This work, which builds upon the company’s well-known repertoire, takes us to a dreamlike world in which phantoms and obsessive thoughts take on a fundamental role in the life of the author, especially during his time in Argel. Iron Skulls Co. presents a contemporary creation in which they reflect, through ‘theatrical breakin’, the story of a frustrated soldier who succeeds in channelling the negative energy that surrounds him into art–transforming from a soldier into one of the most important writers in literary history.

Iron Skulls Co, based in Barcelona, is a dance collective dating back to 2012-13, though originating from the Bboying (Breakdance) group called Iron Skulls Crew, formed in 2005. Composed of dancers from several areas of Spain, it is known for its distinctive style, bringing together various disciplines, and always aiming to further the influences incorporated into their productions. Members of the dance company come from various backgrounds including breakdance, hip-hop, contemporary dance and acrobatics and they draw inspiration from various disciplines including martial arts, musical production, design and fashion. This eclectic ...