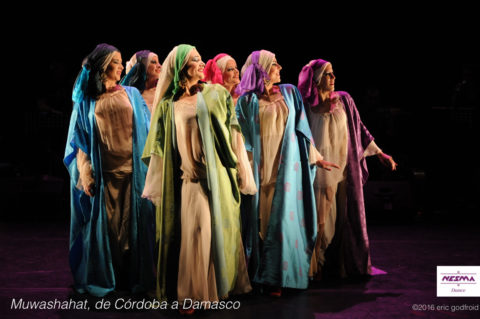 A Thousand-year Journey from Cordoba to Damascus

Using all the exuberance of her neo-Andalusi choreographic language, at once emotive and contemporary, Nesma takes the audience on a journey in the footsteps of the muwashah, a poetic form created in Al-Andalus.

Nesma presents a new choreographic creation, inspired by the history of Al-Andalus, telling the journey of Andalusi poetry from the ninth century to the present day.

Born in the mix of cultures at the height of the intellectual flowering of the Arab world, the brilliant Andalusi civilisation left an indelible mark on the Iberian Peninsula and across the Arabic world. In addition, it served as a channel for transmitting oriental wisdom to the West. Despite all the upheavals of history, its cultural legacy continues to fascinate.

Nesma creates on the stage an innovative, neo-Andalusi spectacle, interpreted by six dancers and six musicians with musical arrangements by the Spanish singer and composer Irene Shams. Using a very personal perspective, from a crossroads of cultures, Nesma brings all the exuberance of her neo-Andalusi choreographic language, at once emotive and contemporary, to take the audience on a journey in the footsteps of the muwashah, an original and revolutionary poetic form which was born in Al-Andalus and which gave rise to a musical tradition. Nesma and her company embody on the stage the muwashahat (plural of muwashah), from the splendour of the Omeya Caliphate of Cordoba, its exile and journey across the Mediterranean, from the Maghreb to the Middle East, and its renaissance.

Nesma shows us an important page in our history, which is also a mirror of our current challenges: respect and dialogue in the face of confrontation; solidarity in the face of forced migration; historical memory in the face of blindness. Above all this is a work which illustrates the importance of arts in society, cultural diversity and freedom of expression.

A Spanish Dancer and a Choreographer of Oriental Dance, Arab-Andalusian Dance and traditional Egyptian dances, NESMA discovered Arabic music and dance participating in shows created with her brothers for television. She was captivated and became initiated in dance in Madrid and then Paris. She lived in Cairo from 1993 to 1998, where she deepened her knowledge of the culture and traditions of Egypt, while perfecting her artistic technique. She had enormous success with more than 3,500 shows on the most famous stages of Cairo. She then worked with the Egyptian National ...
+ info