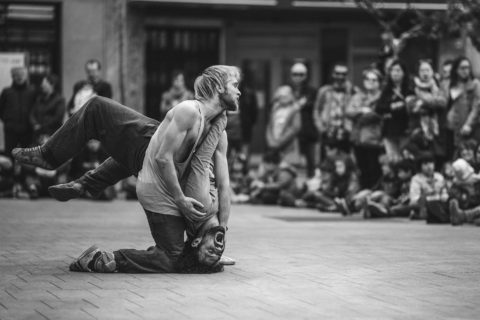 Hasta dónde…? is a contemporary dance duet based on the contact technique. This 20 minute play has been taken from Al menos dos caras, which was performed for the first time in Festival de Otoño en Primavera 2011. Since it was firstly performed in Festival Mudanzas in Cartagena (Murcia), the duet has toured more than 30 cities worlwide.

“Hasta dónde…? is a struggle between two sides, the inner sides we all somehow contain. The manipulation we practice on ourselves to get… how far? (¿Hasta dónde…?) How far can you transmit? how far can you suffer? how far can you pull or let yourself being pulled? This is the concept of this piece of work. We went to physical manipulation limits between two bodies and we began to break walls down. No side is a winner. My goal was to find a common world, where you’re giving 100%, supporting the other and trusting him. In every movement there is a lot of freedom to improvise and decide which direction to take: it is the opportunity given to me by the other body. I have always worked this way, connecting with another soul, another person and body, and telling another story based on the relationship that arises during work.”
Sharon FRIDMAN

Once we give in to the body’s ways, we leave behind what stopped us from being ourselves. A waltz appears approaching each other, between us a bridge, a possibility, emerges.

We don’t know where the trip ends but we know that there is no return, no fluctuation.

We´ll recognize us behind the threshold, on the shoot of the road where the falling of our bodies come to an end.

If we want to ascend, we must go down first, but how far…? (hasta dónde…?)

“… A gem of intensity and nuances: Hasta dónde…?, recommended and exquisite play that leaves everyone speechless, duet from the lack of love towards chaos, beautiful miniature backed by an effective and sombre music. Sharon and Arthur slog their guts out in the speech, they know that everything that unites them, will separate them, and they transmit it in a high level tragic and torn up breath. “ Roger SALAS, El País, June 20th, 2012

“…when Sharon Fridman and Arthur Bernard finished their performance, the building almost collapsed by the applauses… what they did on stage was full of magic.” Angélica González, Diario de Burgos, July 30th, 2011.

“The first prize of the jury and the audience award went with overwhelming unanimity to the Israeli choreographer Sharon Fridman, for a very precise duet, very spectacular, that takes full advantage of dance-contactpossibilities , through a continuous movements chain of both dancers, Arthur Bernard Bazinand Fridman himself, which is subjected to rapid tempos with short moments of relaxation.” Rosa Sanz Hermida, ABC, August 1st, 2011.

Compañía Sharon Fridman is a contemporary dance group formed in 2006 and based in Madrid. The company’s first piece was released at the Certamen Coreográfico of Madrid and won several awards for creation and production.  The technical foundation I use in my work is focused on the relation between gravity and balance, and is inspired by my mother who was born with Arnold Chiari syndrome. I have ...
+ info