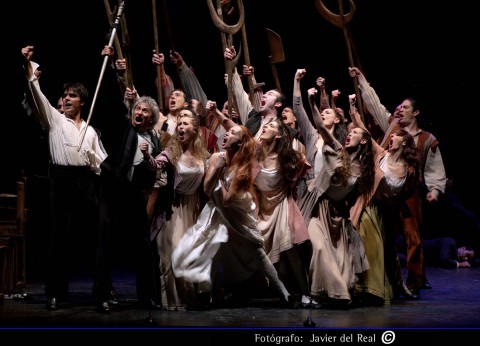 THE MYSTERY OF SIMPLICITY

“Simplicity is not simple to achieve; it is the end result of a dynamic process that encompasses both excess and the gradual withering away of excess.”

Fuenteovejuna, the ballet which now returns to the stage, for the first time since the disappearance it its creator, is above all an incredibly beautiful ballet, the last fruit of great artistic and personal maturity. The subtle and moving quality of the material does not consist of either its aesthetic values –extremely high, on the other hand- or in its spectacular nature, but in the overwhelming simplicity with which he shows the essence of the things he wants to tell. An essence that only a few chosen ones –such as Gades in dance or Peter Brook in theatre- have known how to capture and express, almost always after a long path not without painful renunciations. The piece is based on the play of the same name by Lope de Vega, a play far from the sources that usually inspire the works of Spanish dance and flamenco, even those of the choreographer himself. In it, written between 1612 and 1614 based on historic event published previously in the Crónica de las tres Órdenes Militares by Redes and Andrada, it tells how a whole village in the midst of Andalusia, Fuente Obejuna, rebels against the abuses perpetrated by a nobleman, the Comendador de la Orden de Calatrava (Knight Commander of the Order of Calatrava) Fernán Gómez de Guzmán, and finally executes him. When the King and Queen, the Catholic Ferdinand and Isabella, send a judge to clarify the case, not even by subjecting the villagers to the worst possible tortures do they achieve that they denounce the guilty party, since they all, with one voice, assume the death of the ignoble nobleman and the responsibility of their destiny.

Some literary critics insist that the ideas expressed by the Spanish Golden Age playwright are rather less revolutionary than they seem at first sight, as in the end the hierarchical order triumphs and it is the Monarchs who, in the last scene that does not appear in the Ballet, endorse the justice applied by the village. None of them however have managed to pass over the common sense and the essence of solidarity of the story, as well as the nobility and increasing dignity that Lope attributes to the villagers, aside from having a deep knowledge of psychology of the masses. Feelings of solidarity that could only tempt a man with the political ideas and social aspiration of Antonio Gades who, at the proposal of the writer and flamenco expert José Manuel Caballero Bonald, decided to take on the project. At that time, the creator was already more than fifty years of age, he had lived an intense life and his previous pieces, Bodas de sangre (Blood Wedding), Carmen and Fuego, had met with unprecedented success, both in the cinema and in the theatre. With a great deal less, others would have began to live a bit from their private income but he, after having developed his body, mind and emotions through dance, was prepared for something that very few choreographers, especially those of flamenco, have managed to achieve: to completely stop and “listen”. First, to listen to himself. Thanks to a few very precious testimonies from Gades, we can know the slowness of his processes, his way of starting each piece of work from zero, questioning his inner values and the feelings which drive them and valuing everything that comes in through his eyes: the villages, the people, painting (Goya, Velázquez, Mondrian, surrealism, hypersurrealism…). And then something even more difficult, to listen to others, to everyone who had something to say to him. Among them, Caballero Bonald, who wrote the adaptation for the ballet; Faustino Núñez, with whom he decided the music – flamenco, popular and classical- he would give to each character; and that well of popular knowledge, Juanjo Linares, with whom he studied a portion of the treasure formed by Spanish folkloric dance.

Gades spent over two years of research, reflections and discussions before tackling, finally, with the help of accumulated experience, the enormous and intuitive talent which characterizes him and with foolproof ethics, the huge task of pasting the materials he had gathered together, getting rid of any excesses without compassion. Despite the hotchpotch, the choreographer manages to achieve an ambience in Fuenteovejuna which is profoundly choral and unitary and gives meaning to a language which serves as expression to the thirty-eight protagonists of his story. A rich and varied language which combines flamenco–abstract and introverted-, with the folkloric songs and dances of different Spanish regions, with Mussorgsky who, as happens with some characters in Wagner’s operas, here always announces the arrival of the Comendador, and with silences more eloquent than all the music. A language made of rhythm, dynamic or solemn, of lights and colours capable of creating authentic moving pictures which come undone continuously to create new ones; of chaos and a perfect geometry, enriched with few objects, as scarce as they are well used, such as the farm equipment that becomes lethal weapons or that blanket on which the love of the leading couple is laid.

Finally, as he did in all his works, Gades would carry out the last of his renunciations: stop thinking of the result, in the virtuosity that he could get from his artists, to attempt to discover the source of energy from which the real impulses arise on the stage; working with each and every one of his actors so that, instead of being limited to carrying out the movements dictated as brilliantly as was possible, each one would find the reality proposed to them in their own inner sense.

In this way, with a process similar to that of Lope, Gades achieve that every voice and every body –and on numerous occasions the choruses of men and women work as a single body and a single voice- uses their own languages in the same way that the characters of Lope use the words and verses they feel most related to. As if it were the easiest thing in the world, the artist has achieved that the ballet Fuenteovejuna is not simple a translation or an imitation of the words of the Fénix de los Ingenios “the Prince of Wits” but a story wholly told through music and dance. And he has done this like no one else possibly could, since those who have seen it can attest that there are torrents of arguments in the conversation of the men at a rhythm of solea, thousands of amorous verses in the scene, full of lyricism, showing the love between Frondoso and Laurencia, a well of desperation and impotence in this labouring sigh of the women who tear through the thick silence of outrage… And what can we say about the meeting of the Consejo (Council). So much pain and so many rights trodden on in a single ‘Ayayay’!

Fuenteovejuna is undoubtedly one of the great ballets of the 20th century. It is not strange therefore that, since the company of Antonio Gades itself, back together for the occasion, premiered it in the Geneva Opera Theatre, in December 1994, its short history had been full of unanimous acclaims, of tours as exciting as the one he did, purely by generosity, the length and breadth of his beloved Cuba, and of national and international awards. The same luck that the revival carried out by the National Ballet of Spain, directed at that time by Elvira Andrés, former dancer of his company and great collaborator of the choreographer, had later on at the start of the new millennium. He is unfortunately no longer here to supervise the works nor can we see in the panorama of this incipient 21st century many choreographers prepared or capable to continue his teaching. For this reason we have to be endlessly grateful to the Antonio Gades Foundation that has taken on the challenge, no longer just that of preserving archaeologically–something very easy in the age of video- this jewel of Spanish choreographic heritage, but, of gathering together, at great effort, many of the artists that had the privilege of working with the Maestro, to try to breathe new life into it so that Fuenteovejuna is always on the stage, which is the very place where it should be.

Dedicated to the memory of Celia Sánchez Manduley
Duration: 90 minutes without an interval

“My deepest gratitude to my charming Cuban friend and choreographer, Alberto Méndez, who, during our chats in Havana gave me the gift of his advice, his talent”
Antonio Gades