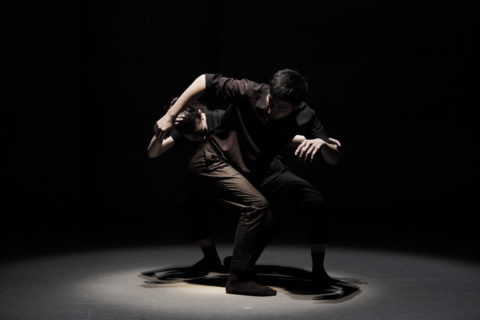 This aesthetic and sensorial contemporary dance piece starts from the concept of “FURERU”, a japanese word not easy to explain in English but which can be translate with three words: “vibrating”, “touching” and “swinging”. In Japan there is a understanding that everything that has a life it also breathes (or vibrates) and so when a “vibrating” person touches the other, the other also vibrates using the resonance phenomenon. By doing so, it is expressed the empty flow and the tremor of the substance that it is not possible to see by the eyes. Moreover and through this phenomenon it is created an “Empty landscape” full of meaning in which the audience sometimes could feel contemplating a film but over the scenical space.

Poetically, the dancers create a landscape where Sun and Moon meet for the very first time. Sun as the masculine energy and Moon as the feminine. Both are striving to define their original selves beyond genres by finding their balance.

The vibration is not anymore about butterflies in the stomach but about the freedom expressed by flying birds. Not confined in the body anymore, they find their expression in the movement. This is not a love story, but as Great Indian Sage said: ‘Many people confuse attachment with love. Attachment creates bondage, while love bestows freedom. Non attachment expands the consciousness, so that one remains totally free.‘
This freedom of/between the two people as flying birds.

Nobuyoshi Asai, Nagoya, Japan.
At his young age Asai started practicing street dance in Japan at an international level.
Formerly a member of the acclaimed Japanese Butoh company Sankai-Juku, Asai has toured and performed all over the world. He also received a grant from the Japanese Agency of Cultural Affairs to dance with the famous Batsheva Company in Tel Aviv.
He became the first Japanese to receive the Special Prize at the Arte Laguna Art Awards in Venice for his piece “Prohibition.” Also he received the First Prize for choreographic conception at NEXTREAM21, Japan, 2015; First Prize for choreographic conception at Festival Afrik Urbanarts, Abidjan, 2013; The 6th Asahi Performing Arts Prize, Japan, 2006; The Prize of Kirin Dance Support, Japan, 2006, and First Prize at World Hip-Hop Championship, USA, 2002. Currently he directs his own dance company PIERRE MIROIR based in Paris and Moonlight theater in Japan.

Duration 15min.
First stage of creation with the support of Instituto Cervantes Tokyo. Second and last stage is programmed for April 2018.