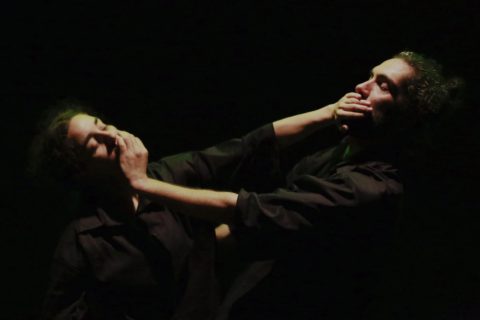 Colectivo Glovo was founded in 2016 under the direction of Esther Latorre (Spain) and Hugo Pereira (Portugal), creating a creative space where both performers and choreographers develop their most imaginative side together.

Based in Galicia since 2019, they work in the creation of the scene for both theatres and non-conventional spaces, as one of their main objectives as a company is to increase the dimensions of the scope of the dynamics of the body.

Glovo admits its passion for the language of movement and pursues the research of new scenic expressions starting from the body itself without established limits.

In addition, and parallel to this creative facet, the company seeks to contribute seeds to the artistic fabric present in the community, generating spaces for collaboration with other groups and artists, seeking to bring together the greatest number of creators, performers and restless body-minds, not only in Galicia but with a notable international projection, with special emphasis on the interest in the elimination of the invisible cultural barrier between Galicia and the north of Portugal.

Since its foundation in 2016, Colectivo Glovo has toured different countries such as Spain, Portugal, Italy or Mexico, among others. With their first piece M A P A, they have received mentions in festivals such as Corto In Danza (Italy), La Espiral Contemporánea (Santander), as well as the Audience Award in the Certamen Coreográfico Internacional de Solos y Dúos Sólodos En Danza (Ourense) or the First Prize in the Certamen Coreográfico Internacional de Burgos & Nueva York – Bailando con piedras.

She was part of the Red Acieloabierto 2020, Danza a Escena 2021 circuit and since 2018 she has been collaborating with the fashion brand Adolfo Domínguez (National Fashion Design Award 2019). Together with the brand, the video creation Materia Gris (2019) is a finalist in the Milan Fashion Festival 2020 (Italy) and selected for the Video Dance Showcase of the 29th edition of the Quinzena de Dança de Almada – International Dance Festival (Portugal), the Fashion Film Guimaraes 2021 and the Mostra Internacional de dança – Imagens em Movimento (Brazil).

In 2020 the company was awarded a grant for stage creation by AGADIC (Galician Agency for Cultural Industries) for what would be its first long-format creation EM-NA, premiered in March 2021 and having already toured theatres in Spain and Portugal

We quote the critic Afonso Becerra, who speaks of EM-NA as follows:

“EM-NA is a piece of delicate yet powerful dance virtuosity. Contained intensity. Electrifying asceticism. As I pointed out, Esther and Hugo have a unison that is pure magic. It is as if the difference is mirrored in the conjunction and the movement, thus multiplied and mirrored, acquires a vibration that touches and traps us”.

She has participated with the piece MARRAFA (extract from EM-NA) as a finalist in the 35th Madrid Choreography Competition, and has won prizes in Barcelona and Austria.

In 2021 they venture again to the creation generating two new pieces: ALLEO and TABÚ.

ALLEO is a short-format proposal for non-conventional spaces that combines the Galician-Portuguese tradition with movement in a piece with a markedly northern character. At the same time, they are developing the creation and production of the new long-format stage piece TABÚ, which has won a co-production grant from the Centro Coreográfico Gallego.

In 2022 the company continues projecting its stage tour with dates in Italy, Barcelona, Portugal and Mexico, and is preparing a video-creation collaboration with a Portuguese entity for 2022-2023.

In parallel to this creative facet, Colectivo Glovo directs the residency programme Atopémonos Bailando in Lugo and co-organises the festival Cartografía en Movemento, also in Lugo.

With ‘Cara a unha escena plural’, a project that promotes the circulation of professional dance and live arts in our territory, they collaborated by sharing their experience of return and commitment to the Galician context under the title “Quen somos nós e que facemos aquí?” 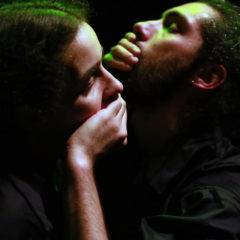 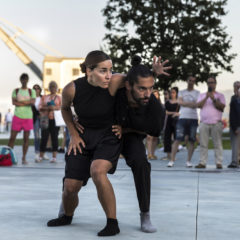