Isabel Lavella Clemares (Algezares, 1966). Trained at the Professional Dance Conservatory of Murcia (Spain), she graduated in Spanish dance and Classical dance. She first knows Contemporary Dance at the summer courses ruled by Gerard Collins in Tarragona (Spain). As a dancer, she had collaborations in two productions with “Ballet Contemporáneo del Alba” in Murcia. After this, she moved to Valencia (Spain) to work for a year at the company “Vianants Danza”. From 1992 to 1997 she lived in Holland where she was selected by the Arts University EDDC.

At the end of this stage, she returned to Murcia, establishing herself as one of the exponents of the “New Dance” in the Region of Murcia. During that professional stage, she collaborates with Cristina Andreu in Valencia in 2001 and also with “Cía. Ferroviaria” in different productions. She has coordinated the Mov-hi Festival in its two editions: 2008 and 2009. Since 2008 she is a permanent contemporary dance professor for the Professional Dance Conservatory of Murcia 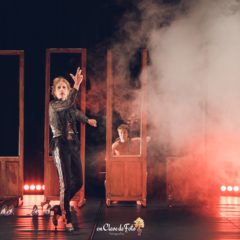