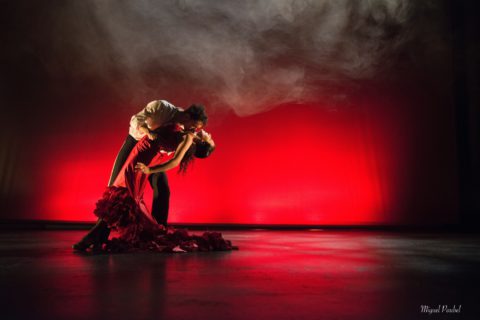 Merimee away his style typical of authors of his time, recharged and tragic; he seeks closer to literary realism, and this we can see from the descriptions and dialogues of his “Carmen“.

“Merimee’s style was still in the romantic imagination, but his writing is more typical of the oral tradition; Four words serve to frame the scene, and dialogues of the characters (…) we do not find a single useless word (…) the words are limited to the meat of the story, leaving the reader is lost in phrases and descriptions (…) that deviate from the plot “(Mauro ermine Carmen, Prologue; Edaf Library)

Based on this method, the very idea of ​​Juan Manuel Prieto is reflected in every scene and every dance the very essence of the feelings of each of the characters through the language of Flamenco and Classical Spanish Dance, and aided by the experience of Carlos Fajardo in theater direction, try to approach a realistic and thus show Merimee’s novel faithfully as possible.

This Ballet aims to tell the true story of Carmen and away prototype “femme fatale” that Bizet opera libretto unveiled his version of the play. Mérimée describes the character is a “tied” women in the patriarchal society of the nineteenth century in Spain. The novel introduces us to this gypsy woman as someone independent (something almost dangerous at this time for someone like her) and shows how, using topics of gypsies, she gets to own their own freedom to the point of deciding to die to preserve it.