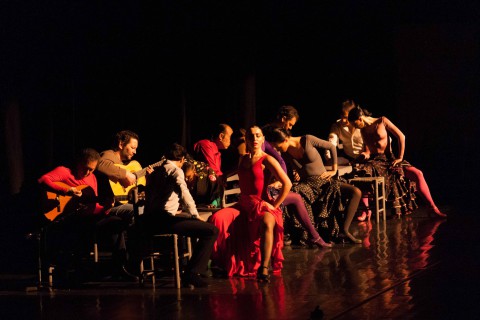 The theatre version of CARMEN was conceived roughly at the same time as the shooting of Carlos Saura’s film. The film’s success, which took even Gades and Saura by surprise, encouraged Antonio Gades to produce a version for the theatre that turned out to be another masterpiece in the line of BLOOD WEDDING and FLAMENCO SUITE. The premiere in Paris in 1983 was a considerable popular and critical success, revealing Antonio Gades to be not only one of the most important dancers in the world but also one of the greatest choreographers.

Antonio Gades’ reasons for creating this work can be summed up in the ideas that he explained in a press conferences. In his view “Carmen is neither a frivolous woman nor a man-eater.

She’s just an honest woman who when she loves says she loves and when she doesn’t love and says she doesn’t. In other words, a free woman. I don’t think this makes her a maneater.

Carmen also doesn’t treat her feelings as private property. When she loved she said so and she did the same when she stopped loving. She also had such an exalted idea of freedom that she preferred to die rather than lose it. She’s always been treated frivolously and as a maneater. But Carmen has something essential which is a far cry from all this – her concept of class and her nobility.

Referring to the success of CARMEN all over the world, Antonio mentioned the French critics who said that “Merimée brought Carmen to France but we’ve taken her back to Spain.” Carmen has almost always been treated in a superficial and frivolous way but she is much deeper than that. He said that Carmen was misunderstood because when Mérimée wrote the work in 1837 she scandalised puritans and those who could not see that she stood for genuine female emancipation. Don José, on the other hand, is a fugitive from his class, a bourgeois ‘slumming it’ who will not be faithful to her. He does think of the loved one as private property.

“I did CARMEN because I didn’t like the stereotyped false image of her. She’s a woman who when she loves gives herself wholly and who never forgets what class she is even in the most exalted company.”

Inspired in the work by Prosper Merimée