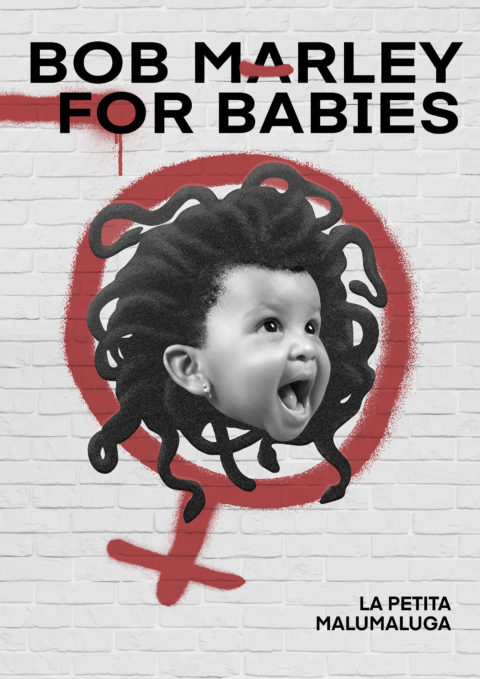 The 2014/15 season of La petita malumaluga premiered Beatles for babies. A production which, fusing movement and music, aims to offer a production for both children and adults. A concert in motion. Choreography and music with honest, non-childish language.

Beatles for Babies has opened theatre doors to this sector of the population in dozens of cities and scenic spaces. The Teatro Nacional de Catalunya, the Teatro Español in Madrid, the Macao Cultural Center, and the largest theatre in the world under one roof, Weiwuying in Taiwan, are just some examples, among others. All of them have opened up to this audience for the first time through our productions.

Since the creation of Beatles for babies (a tribute concert to The Beatles), we decided to create a trilogy of productions with musical references that interest us; to research and delve into for various reasons. Bob Marley for babies is the second part of this trilogy.

In this second production, we aim to collect the music, ideas and struggles of Bob Marley. And above all, ask ourselves: given the current economic, political, social and climatic situation, what would the most influential non-European or American artist of the 20th century currently propose?

Bob Marley for babies is the second part of the trilogy that La petita malumaluga kicked off with the international hit Beatles for babies (a tribute concert to The Beatles).

Four singing dancers, or four dancing singers, and a cellist perform sophisticated vocal arrangements of the greatest hits by Bob Marley, one of the leading African-American cultural icons of the 20th century.

An explosion of energy sung and danced where the audience – seated inside an immersive 360-degree scenography – is the protagonist at all times.

This time, La petita malumaluga sets out to create bridges between Marley’s pan-Africanist and equality beliefs, and feminist causes in various stages of women’s lives and in different regions around the world.

Music, dance, participation, technology, reflection and new scenic languages for the most demanding audience: early childhood and their families.