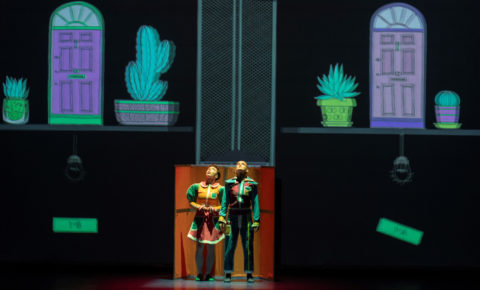 AIR, however strange it may sound, takes place in a lift.

On a good day, two neighbourswho hardly know each other get stuck in a lift when descending to street level from their flats in a big city high-rise. Faced with the unfamiliar situation of confined space and the slow worsening of air quality, their worry and uncertainty set in. At first, the two neighbours attempt to calm each other by inhaling and exhaling the air. Initially in a hurried manner, but steadilythey manage to calm down from taking deep breaths of air.

Having overcome the initialshock, they open their minds, and, as if following the air escaping through the small grills of the lift, they undertake a fanciful journey. From the stratosphere to forests, over lakes and seas, they fly towards the big city where the air is as dull and contaminated as its citizens. Most of them, however, are totally oblivious to it, not having time to even question their own happiness.

Nonetheless, the adventure of this strange trip, whether real or not, leaves an indelible mark on our protagonists.They come out changed, with new and much clearer ideas on how to live life than they had before getting into the lift.