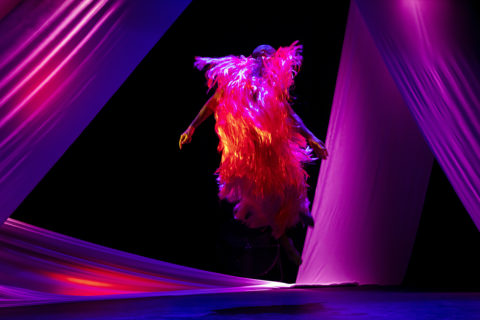 The lifespan of many butterflies is no longer than two weeks. However, before turning into a butterfly, the little critter lived for ten days in the shape of a chrysalis, and before that it was a caterpillar  for another two weeks, and prior to that an egg for four days…

Where does life begin, and where does it end? Who would dare to define life in its succession of cycles?

Everything, including ourselves, revolving around us forms part of an uninterrupted cyclical movement – a succession of births and deaths. And when something dies before our eyes, it becomes part of another cycle. It transforms into another movement. Ultimately, it stays alive in some form.

This finite time we have invented falls short in our intended measure of the infinite flux having neither beginning nor end.

Here we will be witnesses of a person’s transformations. A journey of an hour takes us to the acquired forms, emotions, experiences, and life lessons. In this short life, it even becomes difficult to decide when the very scenes making up its lifespan started and finished.

Asier Zabaleta was born in Ezkio (Gipuzkoa) in 1972. Before he joined the Swiss company ALIAS (Geneva) in 1999, where he participated in the creation of six theatre-dance productions, alive exhibitions and public improvisations, he worked with a number of dance and theatre companies including Arteszena, Adeshoras, Compañía de Vicente Sáez, Hojarasca, Q-ro y cía. and Maskarada. When he left Switzerland in 2004 he created ERTZA, with the aim of finding a new space in which different artistic disciplines could work together with the physical expression. His works have ...
+ info