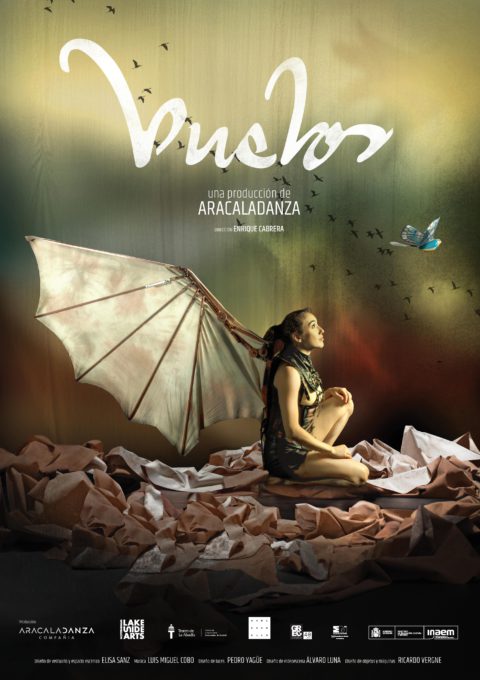 When in the mire of the apparently unnamable reality they thought that we had forgotten to dream, they were wrong. Despite the rigors of sadness, the magic of the imagination illuminated a pathway of wonders that allowed us to grow wings and fly.

Leonardo da Vinci wished for utopia with all his heart and undertook his work to bring it to fruition. And now, his undeniable legacy has become our inspiration: his visionary dream feeds our roots and his striking oeuvre nurtures our work.

For some time now, Aracaladanza has dived into the rainbow, discovered tiny paradises, sketched clouds and painted constellations. Now the dream of swimming in the sky, walking on water and flying on land is back.

We do it because we feel the need to share the certainty that freedom is only possible when we dare to dream about a fairer and freer world. A happier world. A more human world.

Vuelos is a contemporary dance show for children and families, which aims to spark enjoyment of all the senses, turning them, too, into a subversive tool that contributes to changing the world.

The visionary genius of Leonardo de Vinci pushes us to reconstruct a world in which the mere act of thinking is subversive and revolutionary.

Aracaladanza has been dazzled by the intelligent artefacts envisioned by a rebel with a cause.

His possible designs and his detailed plans create a universe in which even madness is within reach.

Surprised and admiring, we sought to give wings to the imagination with the creative impetus that relentlessly multiplied the Renaissance man interested in all knowledge and creation.

Vuelos is a production of Aracaladanza in co-production with Sadler’s Wells Theatre, Teatro de la Abadía, Nottingham Lakeside Arts and Comunidad de Madrid. And in conjunction with the Festival Grec Barcelona 2016.

Vuelos has the support of the Ministry of Education, Culture and Sport for its national tours.

Take dance, contemporary at that, for child and family audiences, add new audiences to quality and innovation and it is quite evident what you get: Aracaladanza. Since the beginning in 1995 and spurred on by the choreographer and true soul of the project, Enrique Cabrera, the company has become a benchmark for Spanish scenic arts earning the acclaim of both critics and audience. They have been invited to participate at the most important national festivals in Spain and internationally in great theatres and festivals across Europe, Africa, Australia, Central America and Asia. ...
+ info