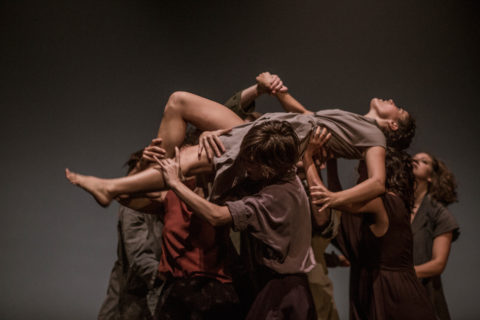 A great political emotion is a scenic proposal inspired by the “Memory of melancholy”, an autobiography by Maria Teresa León, that covers the crucial years of our recent history, the ones from the civil war and exile: these years, marked by a political enthusiasm, the revolution’s myth and the faith in the utopias.

Without historical pretension but with the intention to reveal the archetypal and universal from those events, we will try to embody the political emotion which pushes people to believe in their right to intervene in the history of their country, as if they would own the future. This emotion in the 20th-century disasters -wars, totalitarianism, and their consequences- has been unjustified.

The dance and the physical action, the songs and breathing, the author’s original texts and the original musical proposal interpreted live, and inspired in European popular topics evokes María Teresa memories: episodes of her autobiography, like the Prado Museum preservation, the action in the entrenchment in Teatro de Guerrillas, political and social events like the women participation in the war and key concepts as collective body, the exile and the memory.

Through her memories, we are not pretending to dance Maria Teresa’s life, but her vision of the world, marked by an unstoppable empathy with the most underprivileged people full of contradictions, and the corrupted dream of seeing the success of a Republican and Communist Spain.

From the exile, Maria Teresa hoped to come back one day to her free country from the Franco dictatorship. When it finally happened, in 1977, the Alzheimer didn’t allow her to recognize her own homecoming. Spain and María Teresa suffered the same fate: the erased memory, the sickness of oblivion.