A Bit of No One Carmen Fumero Co. 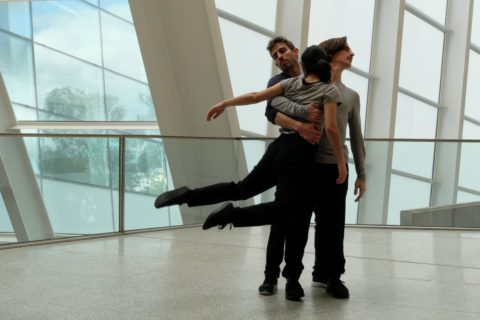 A bit of nobody is a proposal that was born with the motivation to give importance to the fact of not being anyone.

It is a meeting point between three anonymous characters, a parenthesis in the path of any of us, where the search for an own identity and the encounter with failure are the protagonists.

“A bit of nobody tells the story of any of us, talks about trying and not achieve it, of the anonymous and of not being anyone. Because someone was once a nobody who wanted and did it. “

‘A bit of no one’ is a new piece by the young Canary creator and dancer Carmen Fumero. It speaks (perhaps) of aspiring to become someone, of the need to be accepted, fit in, participate and form a part of the overall total. On stage are three committed dancers of different sensitivities and qualities of movement portraying the tension of rejection. The two men, Miguel Ballabriga and Indalecio Séura, appear intentionally connected and share a code of conduct; at times they go in unison to establish direct and frontal communication. In silence Fumero observes them. She, and it is not unwarranted that she be she, remains still, a mere witness with a desire to participate. More than halfway through the performance she tries to become part of this world, but she is ignored and rejected, at times even exploited. Alone, she dances frenetically in response to their rejection. Subtly, but determinedly, her message gets through to the audience.

In her previous successful duet with Ballabriga “Eran casi las dos” [‘It was almost two’] from 2015, Fumero explored the low points of attraction and composition that can happen in a relationship. Now she goes one step further in her interest to explore the troubles of human relationships. In her ever modest and never obvious dance, she takes great care to deliver a clear message to the audience. The elegance and good performance of her dancers also stand out in this relevantly themed short play.

Carmen and Miguel are independent professional dancers that collaborate with several choreographers and dance companies in Spain. They have worked together under well-known Spanish choreographers, such as: Antonio Ruz, Daniel Abreu, Mónica Runde, Iker Arrue, Dimo Kirilov and Tamako Akiyama, La Intrusa Virginia García/Damián Muñoz and Compañía Lava. They started to develop their own project at a choreographic residency at Centro de Danza Canal (Madrid) in 2013. Since when, their works have been widely presented in Spanish Dance networks and festivals, as well as in some European festivals, like Tanec Praha ...
+ info