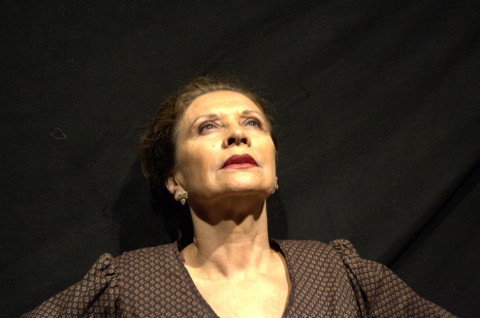 “Never shall the jailers Place the night behind bars Whenever she wears a brooch Candlelight fills her eye The wind lifts away her story Like birds in flight A gunshot thwarts their attempts At the freedom they so crave.” “Sad are the wars not fought for love.”
These verses written by the poet Miguel Hernández while held in jail broadly encapsulate the story of our protagonist, a woman facing her last night in prison. The play presents a triptych that recounts the key moments in her life before and after the fatal outcome of the war.
Through a series of flashbacks and dreamlike elements that slowly begin to unravel the circumstances that separated her from her lover, the story follows a meeting of two characters as they try to reconstruct the idyllic memories of their past to evade the disaster that led to their separation and the horror of war throughout the course of their lives.

The imagery of trains entering and leaving the station serves as a metaphor for lost opportunities over time, that which lies at the heart of the story, and the dream of one final chance to save each other as they stand on the edge of the platform at the Last Stop (Última Parada).
It is a journey into the memories of those who were denied the chance to bid farewell to their loved ones because of war. “Goodbye my brothers, comrades and friends. I bid farewell to the sun and fields of wheat.”
These are the words that adorn the walls of the prison where the people’s poet died, unable to bid farewell to his eternal companion.

AndanZass, is linked to TNT  (Territory of New Times)  which celebrated 20 years in 2015 . Has become a beanchmark for theater investigation across the country. In 2008 TNT with Atalaya has won the National Theatre Award  “for the creation of an original  exhibition space, production, theatrical training and  reflection,  the result  of  a  long  career”.  In  2003  the  European  Union  included  it  in  the  programme  EUROPEAN  THEATER LABORATORIES AS CULTURAL INNOVATOR, and at the same time that included other four emblematic European centres with greater experience and prestige. In 2012 they ...
+ info