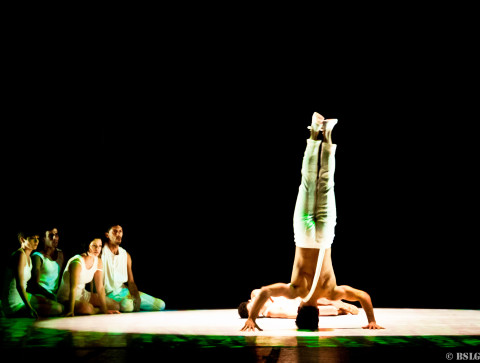 To the sound of Heitor Villalobos’ wonderful music this dance recreates the Amazon legend of Uirapuru. Here we are sent back to genesis, to a new kind of Adam, a bird which is not really a bird.

This performance begins with the young bird singing and building its nest. All the other beings living in the Amazon are listening quietly to this exceptionally beautiful song, which only sounds once a year. Then appears the handsome young man who is coveted by all the woman in the tribe, except for the chieftain’s daughter, whose love he will never win.

While the tribe is celebrating life with their ritual dancing, the young man is suffering.

Moved by compassion, the God Tupa, represented as a deus ex machina, eases his broken heart by converting the young man into the bird with the most beautiful song in the Amazon, the Uirapuru. As of then, once a year, the forest listens silently to the beautiful song of the Uirapuru.

Dani Pannullo recreates this legend in an urban context with young dancers of contemporary dance and hip-hop, who accompanied by the orchestra’s symphony takes us to the imaginary forest in which the action unfolds.