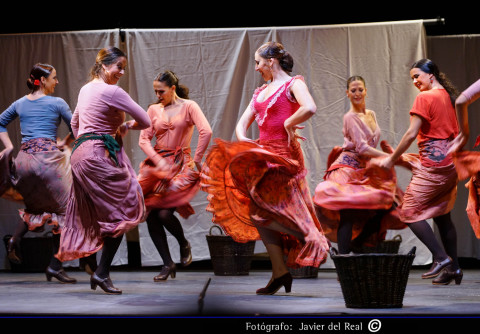 THE PURPOSE OF FUEGO

Coinciding with the tenth anniversary of the death of Antonio Gades, the Foundation that carries his name decided to undertake a very significant challenge setting up another version of the Manuel de Falla’s ballet “Enchanted Love”. With the title of “FUEGO” this was the second scenic interpretation the Alicante choreographer had of Manuel de Falla’s work.

Being an exponent of Gades’ core idea “return to tradition if you want to evolve”, this ballet is a transitional piece between the almost mythical setups in Carmen and Fuenteovejuna. It was also the last of the joint mythical flamenco works by Gades and Saura, and with the same overlaying structure they followed in Carmen, first as a film and secondly as a ballet.

About this, Gades said the following:

…The scenic version is very different from cinematography. Carlos and I are telling another story altogether. We are providing the soundtrack for the film song by Rocio Jurado and the Spanish National Orchestra, directed by the maestro Jesús López Cobos. However, we have changed the order of the pieces and I have added some flamenco and various popular songs that do not appear in the film.

Regarding the origin of the play, it is important to know that the choreographer had just gone through a very difficult personal experience. Apart from the breakup with his wife at the time, Pepa Flores, his father also passed away and even his brother Enrique who had up until then been part of the company suffered a tragic death at that time.

The incessant ballet tours around the world also wore Gades down and he decided to get away from the spectacles. Instead he began a period of personal reflexion and rest from which he re-emerged in 1989 with various artistic projects exhibited at events such as the inauguration of the Cairo Opera, the tenth anniversary of the National Ballet in Spain, and what was to be the final touchstone; the request by the Chatelet Theatre in Paris to stage the ballet FUEGO. Gades’ state of mind is reflected in the play, which intends to escape the imagination of the original manuscript. It tells the story of a mental alienation surrounded by an oneiric and sinister atmosphere.

Premiering in 1989, FUEGO captivated the Parisian audience witnessing the first performances of the ballet. An extensive tour across France, Italy, Germany, Switzerland, Japan and Brazil followed the premier. However, Gades had not fully recovered and kept searching for the equilibrium and energy needed to run the company and face the crowd.

He wanted to get fully back to life and the sea from which he found the strength and inspiration needed as an artist. Because of this, the play was never shown in Spain. Its brief existence therefore allows us to contemplate it today as if it were for the first time. Many of the resources put in place have never been used before and they render the play a touch of surprising freshness.

Antonio Gades knew very well how to rub shoulders with the people he wanted to work with in his plays. Great professionals such as Carlos Saura, Gerardo Vera, the maestro Jesús López Cobos and Rocío Jurado were but a few of the most important names who got together for this scenic version of the Enchanted Love. Moreover, during the setup, he was assisted by Goyo Montero, the lighting technician Dominique You (now technical director of the Antonio Gades Company) and the present artistic director of the company, Stella Arauzo.

The first ever opening night of FUEGO in Spain took place on the 6th July at the Zarzuela Theatre together with the Madrid Community Orchestra, run by the maestro Miguel Ortega. When we worked on the remake of this play, we put all our expectations, stories, knowledge and work together. But above all we shared what brings people from all over the world together, and what makes dance survive despite the enormous difficulties it is going through: a passion for one of the most authentic universal languages “dancing”.

The Antonio Gades Foundation is a non-profit private institution created in 2004 with the objective of maintaining, protecting and disseminating the work of the Spanish dancer and choreographer. To this end, the Antonio Gades Foundation protects and catalogues the funds from the Antonio Gades legacy. It also supports and supervises the reconstruction of his choreographies, edits publications that go into depth with his plays and promotes educational activities destined to make Spanish dance and flamenco accessible to the general public.

Run by his widow Eugenia Eiriz with the support of her close helper Josep Torrent, and under the presidency of Maria Esteve (Gades’ daughter, actress) it structures its lines of action in the aspects of conservation, dissemination, training and charity.

Some of their main accomplishments have been the digital edition of the Gades trilogy recorded in the Royal Theatre and shown in cinemas and television across the world and the edition of various materials destined to make Gades’ works accessible to the new generations. They have also facilitated the staging of Gades’ plays by other companies (The Spanish National Ballet, Ballet of Magdeburg, The National Ballet of Cuba). Moreover, they have opened the historical archive of Antonio Gades’ life for researchers, created the organization for the exhibition “The Art of Gades” and “Antonio Gades”, “60 Years of Spanish Dance and Antonio Gades”, “Seen by Antonio Miró” and an ample educational programme meant to help primary and secondary school teachers introduce the subject of flamenco in the classroom. Finally, they have set up a successful educational programme with the title “Movements, from tip to heel” which intends to help new generations know and enjoy one of the richest and most appreciated cultural heritages of the Iberian-American universe: Spanish Dance.

Music of “The Enchanted Love” by Manuel de Falla