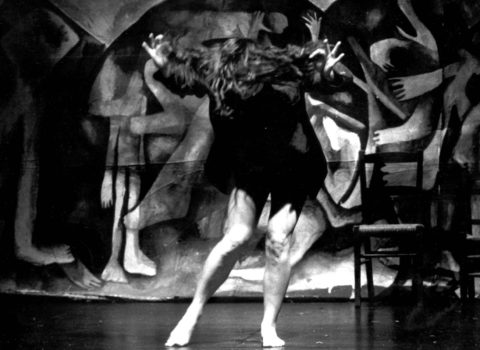 Salud López (SLD), Seville (Spain) Choreographer and gestural researcher. She directs the SLD Laboratory “La pensée en mouvement” in “Tierra de nadie” From no man’s land to anormal nomad. Pedagogical experiences in creation”.  She has conceived an endless number of projects such as “Pista Digital,” “Proyecto Paso,” “Coreógrafas Prêt à Porter,” “La mujer la danza,” “Retahílas travectos y tangentes entre la choreografía y la desempeño,” “Crea R tu vídeo danza,” “Espacio Abierto” … Since 1990 she has also directed the contemporary dance company Octubredanza. She studied Philosophy and Educational Sciences at the University of Seville, as well as in other dance schools and national and international companies. In 2005 she created Sevilla Corporativa Danza. Her choreographic collaborations include prominent artists, such as Andrés Marín, Israel Galván, Northern Stage Company of Newcastle, among others. Salud López is artistic director and responsible for the project “endanza lugar de creación” (Seville 1999), that supports companies, groups and artists in the creation and diffusion of their projects. It also organized the Bauhaus Catedrales-Catedral Cinética-Cadenas de Cristal within the Mira! project (Culture 2000). Salud López has given choreographic workshops for the Masters in Dance at the Central Saint Martin´s College of Art and Design in London, and was coordinator at the Mario Maya Flamenco Activities Centre (1996-1998). Founder of the Association of Friends and Dance Professionals, organizer of the Forum for the Development of Dance in Andalusia (2006), she developed the research project “New sites for the improvement of the quality of employment and employability of workers in the field of dance.” Salud López creates and directs the “PistaDigital” prize “Creativa” (2007). She also gives dance training in Spain and abroad. She currently works for the association “en lugar de creación”. Co-founder of the project Corporealidades Póshumanas/Danças Somáticas e Tecnológicas) and conceives the program “Training for thinkers in movement.”  She started a PhD in Visual Arts, specialising in Artistic Research, Media and Cultural Studies, at the University of Évora in 2015.

Salud López received the 2017 Creative Award from the Ministry of Innovation, Science and Enterprise of the Andalusian Regional Government. She obtained the SGAE scholarship for international studies in 2015. Her show La Piedad infausta with music by José Antonio Flores won the prize for the best original musical composition at the Madrid Choreographic Competition. Poiesis Parad is0 no hay billetes