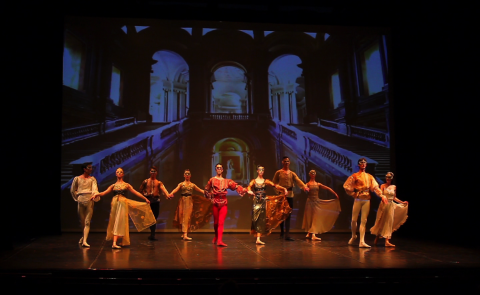 ROMEO AND JULIET – William Shakespeare is an original show based on the classic “Romeo and Juliet” with music by Sergei Prokofiev and lasting 75 minutes. The costumes and acclimate audiovisual work in Italy in the sixteenth century.

William Shakespeare writes the play and makes various characters, making the same thread. Based on an ancient legend about the rivalry between two families, Capulets and Montagues of medieval Italy, embodied in Shakespeare‘s tragedy Romeo and Juliet universal symbol par excellence of thwarted young love.

The fierce enmity between the clans can not prevent two young members of both fall in love and come to get married in secret, union opposition from their parents and passions outside BECOME fatal.

The Company Arts, consists of 10 dancers, started in June 2012 with the objective of disseminating and getting Classical Dance to everyone, providing a job opportunity for young professional dancers in Spain.
+ info