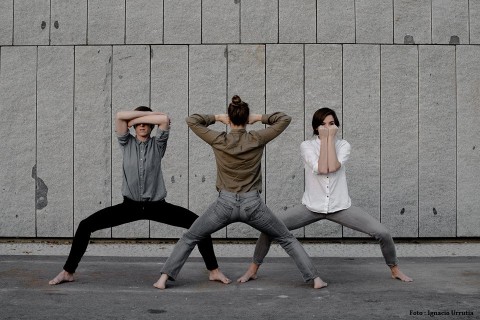 The choreographic idea has the body as its centerpiece. It is the basis on which the soundtrack is added. The political and social information conveyed by the soundtrack constitutes and additional layer of meaning that provides a richer context, either consciously or unconsciously. Through this performance we attempt to challenge the audience to a confrontation. How does the information in the soundtrack directly affect both the performer and the spectator? How do we handle the information overload we are exposed to?

PruebaTrinity 1.0, choreographed by Begoña Quiñones & Mar Rodríguez, arises from a previous project called Load Fulcrum, launched by Begoña Quiñones and Veronica Garzón under the program “Compañías en Residencia” from Centro de Danza Canal and begins to take shape thanks to the artistic residency granted within the framework of 18MASDANZA by Dantzagunea and its Sortutakoak program.