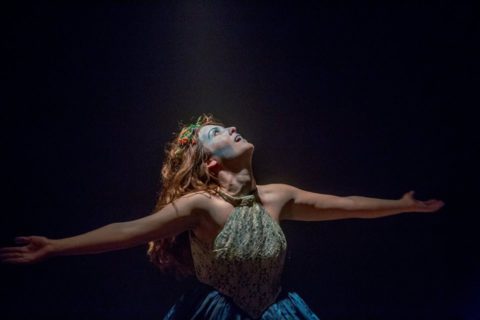 This story is developed in the course of the protagonist by limbo. After drowning in the river, Ofelia wanders between life and death. During this trip, she will search without hope form Hamlet while her father Polonius and her brother Laertes resound in her conscience. Trapped in an eternal autumn, Ofelia rites make her travel through love, passion and authority. Ofelia can stop doing, she doesn´t want to stop being. A lost character, devoured by elements, digging in her own grave to find the reason for her existence.

Ofelia Vegetariana (Vegetarian Ofelia) takes the female character of Hamlet (presented by Shakespeare as an innocent and submissive woman) reinterpreting her from the present: Ofelia is a broken princess, dead in life. Fragments her body in constant trance, allowing the monster that also inhabits her to emerge. Also, the character is immersed in the past, losing herself in a present limbo. She is Ofelia and all the women who precede her, with the root that inhabits that body. In this proposal, she rescues her ancestors: the gypsy, the muslim, the carnivorous. It´s in this sense that meat is recovered (a constant element in the work of the english playwright) and transposed to vegetarianism as conflict and anxiety in today´s Ofelia.