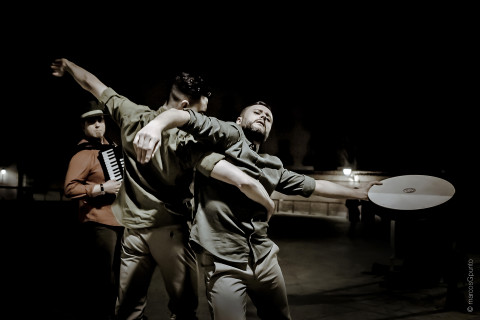 “…I knew you to be fragile and naked,

so fragile, and naked,

that your shadow broke when you breathed…”

“NADA PERSONAL” [‘Nothing Personal’] is a multidisciplinary meeting between three artists reflecting on how to construct or destroy our identity through other people’s perspective. A play revitalizing their identities turns at times diverse, plural, even racial, bordering between tradition and the avant-garde. The movement together with drama and music is revealed as a useful path towards working with emotions.

Daniel Doña has throughout his career frequented open and non-conventional spaces in different festivals both on the national and international stage. The primary motivation for using the street as a stage has been to make dance accessible to the vast general public, revitalize and create new audiences, as well as proposing a continuous dialogue between the exterior space and the choreographic events.

Daniel Doña (Granada 1977) Daniel Doña is one of the most prominent dancers and choreographers representing current Spanish dance scene. His work goes beyond formal boundaries capturing the essence of diverse styles and references. He comfortably moves between renewed Spanish dance, flamenco and contemporary dance, not confining to any given framework. Having led his own company since 2013, Daniel Doña goes on to attract new audiences with shows that fuse tradition with innovation: : Estación Seca (2004), Haz Conmigo lo que Quieras (2008), A Pie (2013), A Pie de Calle (2014), ...
+ info