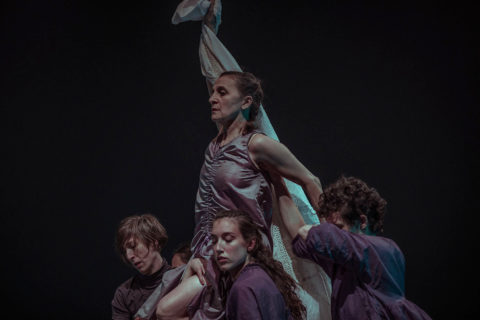 Miserere (When night falls they will be covered by it) is pandemonium, mourning, liturgy and rite of passage: a pagan ceremony involving the figure of the sacrificial lamb, where violence is celebrated as an anthropological mechanism needed for the construction of a group identity: a belief system and its folklore are always rooted in, and are strengthened by, the dead.

Inspired by Elias Canetti’s Crowds and Power and Violence and the Sacred by René Girard, we look at rites (from prehistoric times to more recent times), ceremonies (from religious to sporting and military) as well as in folklore across times and cultures to explore the universal, internal workings of collective thought.

The music, inspired by universal folklore as well as by cult songs, is original, performed live on piano, wind instruments, percussion, guitar and voice, accompanying six dancers of different generations, in a choreography with aspects of theatre, moving from deep tragedy, through irony, to celebratory.

In this way the dance recovers its social, religious and political power, in its decisive and transformative capacity towards a community’s destiny: from fertility to the harvest, victory in battle or peace among the dead. To a time when public space and justice where civil instruments governing the body.

Miserere (When night falls they will be covered by it) is structured into three acts inspired by the three essential moments of all myth, cult, religion (from the pre-historic rites up until christianity).

Act I. The Sacrifice