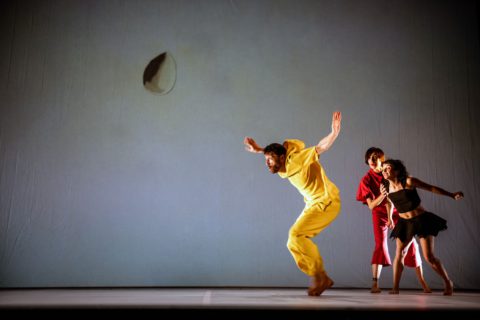 A dance and video-animation show for the youngest ones, born from Joan Miro’s universe. A selection of his graphic works provides the frame for the piece. The vivid colours, the geometric shapes and the apparent “totipotence” of the “figures and characters” kindle the fantasy, suggesting that anything is possible.

As by witchcraft the paintings get alive and take us to an imaginary cosmo-universe: An adventure full of discoveries and surprises.

“MiraMiró”, is a co-production between Baal and the Teatre Principal de Palma. It earned the special prize for the best show 2018 from the ATAPIB. It has toured at several festivals and theatres as Fiet (Majorca), Conde Duque (Madrid), Danza Xixón (Xixón), Rassegna Incontri (Italy), Dance days Chania (Greece) or the Atta Festival (Turkey). Later in 2019 it will be shown several times at the renowned international Prisma festival in Panama, it will tour at the Xarxa Alcover (Catalan area), at the circuit in Madrid and the live arts fair from Castilla la Mancha. In addition it was the most voted show at the Spanish network of alternative theatres, which implies a long tour through whole Spain. In 2020 will be in Mercat de les Flors and Xarxa Alcover tour.