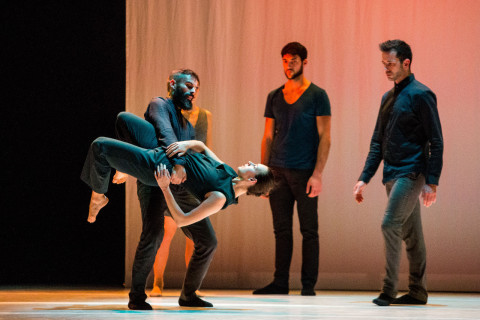 Medea, a feared and powerful sorceress, has betrayed her country for her love of Jason, and when he decides to leave her in order to gain power and status through a marriage to the young Glauce, daughter of the king of Corinth, Medea feels in turn betrayed, fragile and vulnerable. She embarks on a path of ultimate revenge, destroying all that surrounds Jason, his new bride, her father and even her own children.

Euripides’ Medea is one of the most dramatic tales of betrayal ever written. In Thomas Noone’s re-imagining of this myth we witness the loved and the unloved, the cherished and scorned, pitting themselves against one another using a rich, physical dance language contrasting total dynamism with exquisite fragility and intimacy.

As spectators it is ourselves we see revealed, our own weaknesses and rages played out by the characters lashing out and in turn being wounded. The skill and athleticism of the dancers is heightened by an intense soundtrack developed from an electronic sound score enriched with contemporary and urban influences.

Medea is Thomas Noone’s dancers at their finest, a vehicle to show both the singularity and maturity of the company.

Thomas Noone Dance Thomas Noone Dance (TND) is a contemporary dance company that creates exciting physical dance open to a wide sector of the theatre going public. Since its beginnings in 2001 TND has developed a trademark style that requires a high technical ability from its dancers and seeks to provoke emotion in the spectator using the body as the medium of artistic expression. TND has achieved a level of production and performance that places it among the most active companies in Spain. To date it has produced Credo, Loner, Triptych, Fútil, Crush-Crease, Mur, ...
+ info