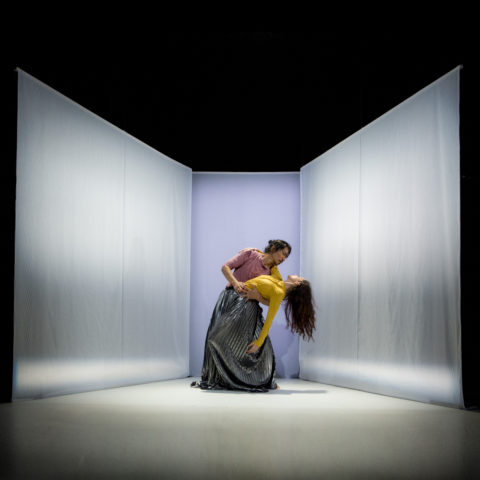 In this new duo piece created and performed with Satoshi Kudo, renowned artist who for many years has worked as a dancer and choreography assistant of Sidi Larbi Cherkaoui, we investigate the liquid aspect of the human body, and the mixture of those two liquid-bodies.

Mazari is a Japanese word referring to the process of mixing. This work focuses on the flow of liquid that fills more than half of the human body and the way in which two bodies mix with the liquid stream. The choreography draws a mixed reaction as a chemistry, as a result of producing heat, foam, crystals, etc., and we verify how the emotion of the individual is affected by these effects.

Kudo has created a movement theory called “Motion Qualia”. This is a way of building movement through reflexes, which makes stability support the body through conscious disconnection with balance. The movement has an effective characteristic to draw a type of liquid movement, and thus it is used as a base in this work.

Satoshi Kudo. Japanese dancer and choreographer based in Stockholm, Sweden.
After working in Tokyo and New York, he moved to Stockholm in 1998.
He has worked with Claire Parsons (SE), Ohad Naharin (Israel), Danish Dance Theater (DE), Eastman / Sidi Larbi Cherkaoui (BE) among others. He has been assistant choreographer and rehearsal director of Sidi Larbi Cherkaoui from 2006 to 2013 and at the Royal Swedish Ballet with Mats Ek, Johan Inger, Alexander Ekman and Sharon Eyal in 2015 and 2017. In 2018 Kudo returns to reappear as a dancer with Sidi Larbi Cherkaoui in Apocrifu.
Kudo began his choreographic career in 2003. His works contain a physical approach to the method he created, “Motion Qualia”. This method stimulates the cerebral amygdala, which does not affect only the physical plane, but it does affect the emotional expression.

Lucía Vázquez Madrid Dancer and Choreographer born in Seville and based in Tokio, Japan. Lucía combines her own creations with the freelance work for other companies and directors. She is interested in all art forms and in her pieces usually investigates with video, sound, text and costumes in a very aesthetic, simple and sensitive way and thinking about the relation between two or more human beings and what unites or separates them. Also in her solo choreographies there is another not-present body to refer to. Awarded as Best Female Dancer at Premios Escenarios de Sevilla 2011 & 2015 and Premios ...
+ info