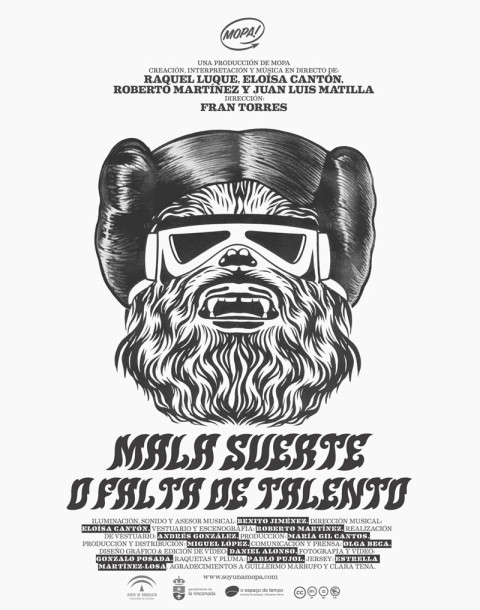 Bad luck or lack of talent is a life music dance show which deals with the idea of Love. The characters they play and risk inspired by outskirts dances (daggering, kuduro, choque, footwork, krumping…) and work through musical, geographic and color references.

“Mala suerte o falta de talento” (Bad luck or lack of talent) began as duet by Raquel Luque and Juan Luis Matilla, which got Certamen Coreográfico de Madrid, Paso a 2, 2009 First Prize. Since then toured through several national and international festivals. Roberto Martínez was in the piece since the beginning doing lights up to the presentation in Barcelona’s Grec Festival. Afterwards he decided to junp into the stage following the energy generated in it, and take care of costume and set desgin. Meriyein’s character was discovered while Raquel Luque and Eloisa Cantón were playing, and it was later incorporated to the cast of “Mala suerte o falta de talento”.

The great Benito Jiménez, with his knoledge as a light tecnitian and his delicious musical taste was involved also from the begining of the project providing several and variated references. Inside this so much creative minds there was necessary to incorporate a director to set the limits and puting things in order. This role was asumed by Francisco Torres, giving a shape to the show.

Among the references used by the creators we find outskirt dances as kuduro, choque, footwork or daggering and musical references as cumbia or dubstep. The bet was to make the music on the stage and each one of them takes his own instrument: concertina, melodica, bass, keyboards, ipad and

Thanks to Guillermo Marrufo and Clara Tena.