The Goddesses of Water EnClaveDANZA 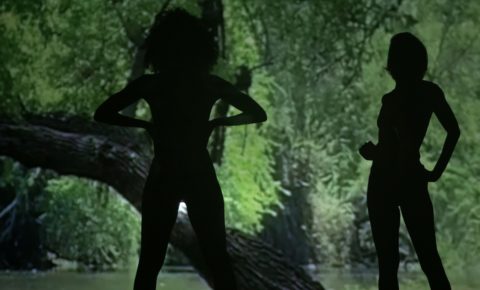 “Root of darkness. A glow peeks out from the bottom and splits the shadow in two. Its light is not from a celestial origin nor its shadow abandoned by divinity: they both emerge from the bluish background of the ruins.

The goddesses of water accompany us on a journey….

Only with them the song is filled.

Listen to them: they are the hum of the hummingbird when dawn has just opened”. J. L. C.

The poem “The Goddesses of Water” tries to express how one of the essential myths of ancient Mexico, the goddess Coyolxauhqui: The Moon, has been extrapolated in today’s society. At the beginning, the myth speaks about the way that the goddess falls from the top of the temple, and her body is dismembered. The interpretation of the myth by scholars is that it is necessary to disintegrate matter to become light.

At the present, this myth has been extrapolated in the fragmentation of the bodies of thousands of Mexican women whose death resembles to the goddess. Excepting that the current fragmentation is because of the violence. The sacred is no longer valid and has turned into a violence that kills 10 women a day in that country. Although the poems tell us about an ancient Aztec mythology, the author’s intention is to bring them to the present, teaching us to break the myth! As contemporary as wondering: what if the goddesses had refused to sacrifice?

We question how the mythology of sacrifice now becomes the artistic representation or the report of murders whose meaning is nothing more than simple dehumanization and the abuse of equals.

Dance piece based on the literary work “The Goddesses of Water” by Jeannette L. Clariond.

Juan de Mairena Award from the University of Guadalajara