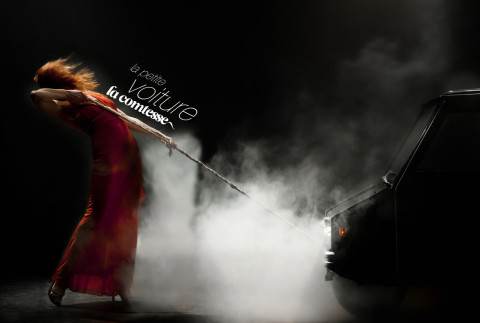 The performance involves a small black strange car totally ecologically propelled. It is a small Pandora’s box that constitutes a closed and mobile world, and one that moves around unpredictably throughout a city.

This Pandora’s Box represents our interior world in which we move about and that sometimes makes us think that it is futile to look towards other places or to look for better moments assuming that nothing has changed within ourselves.

It is the metaphor of our struggle to escape from the context of our life, of a social-economic-political world and one in which we move around, one that formats and imprisons us. A world where all is, more or less, resumed by money and the costs of things that we all desire.

Our protagonists: a chofer that represents glamour, the world we all yearn for and desire, a traveller, an addicted elegant woman that lives trapped in this world of coins that shine brightly, but with the passing of time and once money is mishandled the coin darkens and loses its brilliance.

Multimedia, its supportive countertype, substitutes itself for the roundabout’s windows by way of LHD monitors thereby recreating an entire world on a scale of nature within the car’s interior, a dream world of sorts of the unconscious.

The dancer-actress allows us to discover this hidden, dark, interior world, and almost succeeds escaping from it thereby enjoying the pleasures of life and the world of glamour in which she finds herself immersed in. However, unsuccessful in her attempt, she loses her battle only to see how her metaphorical world overcomes one, and the roundabout once again re-traps her.

This is an attempt, an effort in another place of the city, to escape anew y begin a new life.

Alluding to the disturbing Myth of Sísifo, with quite contemporary aesthetics and images, an entertaining choreography-action, this performance invites one to smile and to think about the world we live in.

The company is grateful to Fernando Arribas ‘Magia de autor/An
Author’s Magic’ and to the Technical Centre’s Covered Pool located
at the Rio Esgueva Sports Facilities in Valladolid (Castile and Leon),
Spain.