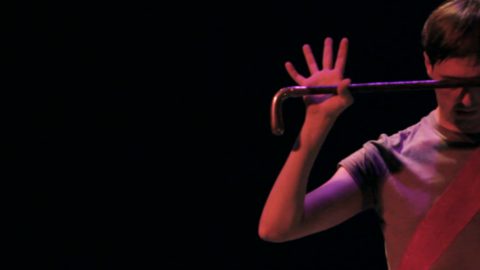 ‘An electric shock feeling. As if I had already lived it. And it is my first time here’. A subtle wind, a stamp of an ordering principle deep and unchangeable, is being distributed through the body by some certain rhythms or scents. What remains unknown is what is wanted to be said, or even if communication can be even possible between such two different figures or intelligences.

The symmetry of the flavour has been broken down spontaneously; for some particular reason, the void of his theory contained a condensed form that has taken the lead violently. When he was asked about what he desired the most, he answered that he ‘would like to learn how to tremble’.

‘The act of choreography itself forces the movement to fall down, each time, into a particular vibratory statement, becoming a singular event. Transferable topology, no breaking nor sticking, aphasic, silent… we deal with a language which is not linear, but spatial. A reality which is not polar, but aromatic; that procure or wangle affections because of its spontaneous interlocution. Plenty of occurrence it gets reconciled with potential, modifying the waves of discourse. (…) It is about understanding that, omitting the singularity of desire, placing across it those kind of processes that distort its grace, that means to disconnect the body with its own potential and interlocution with the place. (english translation from ‘mecamística’ (mecha-mystic), by j.m.)

la exforma is a dance solo based on improvisation, where javier martín crosses the figures of dance in the search of ‘a language which is not linear, but spatial; a reality which is not polar, but aromatic’

A vibration, a movement that evolves into music, into a sparkle, an image, a smell… that becomes incarnate in one way or another, depending on the particular physical space and time in which it gets concentrated or revealed, on a certain range of the vibrational spectrum which is again circumscribed by the contrast between one flux and another flux of movements.

I am a choreographer, researcher, and performer.  Currently, I am developing a research project —of an epistemological and critical nature— on the arts of movement. Stemming from choreographic and performative creation and conceptually overflowing into different discursive genres and their implementation, such as: writing, performative conferences, work processes accompanied by laboratories and work groups, research group activation and development, seminar development, or the accompaniment of training itineraries in different universities. In my projects, I work with Octavio Mas (lighting and technical direction) and Sabela Mendoza (production and mediation).
+ info