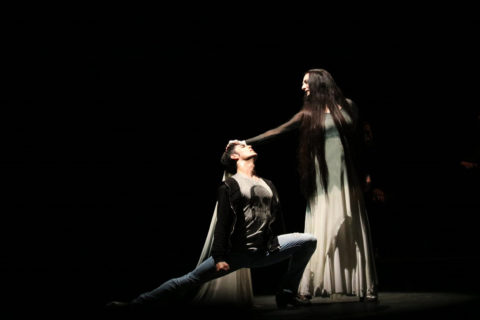 “La Dama Blanca (The White Lady)”, is a show for all audiences but for teenagers specially. Is a brave deal that tries to capture new audience for performing arts. The show has been one of the revelation of the last Fair of Theater of Castilla Leon, and since its release has received good critics and the applause of the public on theaters, high schools, cultural arts center, campaigns against drug…

We all have problems with drugs: of freedom, security, justice, health, money … So that is why we have staged La Dama Blanca “The White Lady”: an allegory about drugs, coded in flamenco dance for all audiences, but especially for teenager people.

Seduced by an enigmatic woman, a teenager dancer dances in her path and he is possessed:

that I didn´t know who was

that lady so white”

The first hug and novelty of the forbidden; and then, the dance of the White Lady enslaves dancer and she haunts him in dreams:

that his soul was as black

as the coldest night!”

To the rhythm of the guitar, singing, percussion and clapping, the lady and the dancer dance the drama of freedom and slavery.

The “Rita Clara” Company is a flamenco dance company founded by the flamenco dancer Rita Clara and the guitarist Jesús Rodríguez. Their shows merge dramaturgy and avant-garde choreography based on flamenco classicism. “Amanecer flamenco (Flamenco dawn)”, “Música y Danzas de la Frontera (Music and dances of the frontier)”, “Nana para despertar (Lullaby to wake up)” y “Flamenco sin más (Flamenco no more)” are shows that have been shown not only in Spain, but also in Europe, Iberoamerica and Japan. All of them share the same idea: To bring Spanish culture closer to ...
+ info