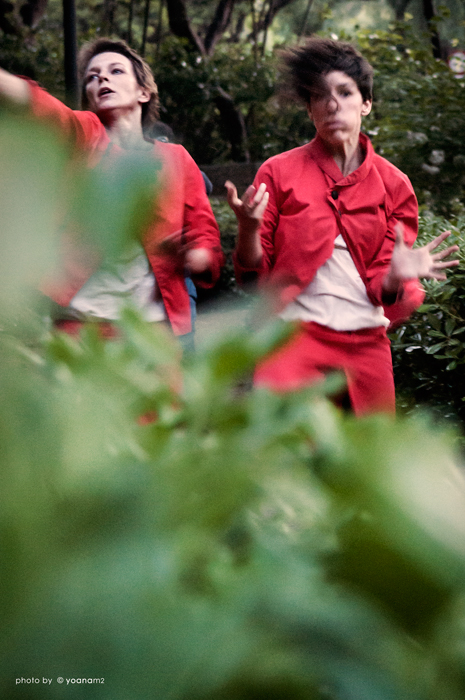 After various individual creations and a long collaboration as performers in different productions Iris Heitzinger and Natalia Jiménez decide to come together to create the piece L_ENTES. A contemporary dance performance situated outside in a natural space (e.g. park, forest) which joins forces with science in order to raise different questions on the subject of human perception. How do we perceive? Which point of view do we choose and why? What captures our attention? What is illusion? What is reality?

The creation departs from a research process in which movement and performing arts interact with scientific knowledge, light study/design and sound creation investigating the main subject of the work, perception. The concepts of space, time, light, sound and movement become the protagonists of the work instead of being mere vehicles of expression. These concepts are present, not only in performing arts but also in our every day life and they compose our perception of the environment.

The audience arrives to a natural space which is defined by its own elements. There is no stage area but a totality of space which is shared between the spectator and the performer. Each spectator decides where to situate him/herself, being free to move around and choose the desired point of view.The piece is composed of duos and solos which play with the space. Proximity and distance, presence and absence, repetition and duration. Visual atmospheres are created between nature and artificiality. Optical illusions emerge which offer different dimensions of perception. Sound scapes which suggest movement and which can be perceived in different spaces coming from different angles involve the audience. L_ENTES constantly plays with the audience, transforming them into an essential part of the work. There is no perception without the witness.