Antonio de Rosa and Mattia Russo, together with Diego Tortelli and Giuseppe Dagostino, are Kor’sia, a collective that arose from the need to use the body to communicate, and to make themselves visible as creators and performers. The four exude an inner urgency to exploit a language, that of the body, which transcends the limits of verbal communication. The risk of the unexplored is the inertia that inspires their creation, incorporating elements from film, photography, literature and sculpture as references for new forms of expression.
Within a realty where our consciousness is fragmented, subdivided into strains of silence and sound, movement and quiet. It is the silence of life that dictates the path of the four members of Kor’sia, who are united by their professional dialogue. They yearn to create and express their opinions and emotions, and through them cause the audience to fall in love, leave their cares at home, and enjoy a refreshing and new experience. The Kor’sia project is both ambitious and difficult, but its principal goal is to partake in an international professional adventure with a long future.
Kor’sia has been collaborating openly with other collectives and organizations since 2015. These include the Compañía Nacional de Danza and Spectare, an association dedicated to collaborating on the production and communication side of stage projects.
The principle architects behind Kor’sia are Mattia Russo and Antonio de Rosa. 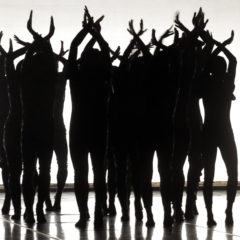