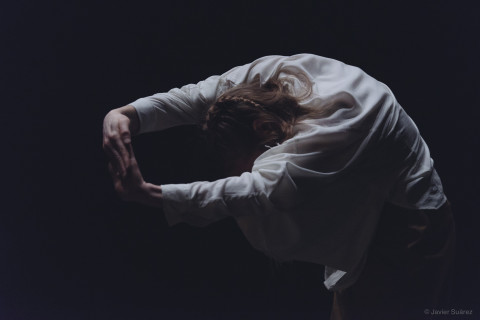 On May 26th 1828, a scruffy, strange boy turned up in a Nuremberg square. He had with him a letter that read as follows:
“I am sending you this boy to serve his king in the army. He was given to me on October 7th 1812. His mother requested me to educate him as if he was my own son. From that day I have prevented him from going outside. He does not even know the name of the place where he has been living. You can ask him about it, but he will not be able to tell you. I took him out during the night. He will not be able to find the way back to my house.”

Kaspar Hauser or how to dance your first encounter with the world after 17 years of darkness and silence, looking at everything with the eyes of someone who never expected or needed the world. Dancing the wild and poetic essence of life, experiencing identity as a dark abyss with no other hope than death.
KASPAR HAUSER or the creative power of language: we exist when we are uttered, we create when we name: it was not the fire but the names that we had to steel. The body is language, the pose is name / Promethean fire: the incarnation
of what is invisible, what makes visible the invisible.

The physical and musical dialogue in between a dancer and a pianist (they will both be body, they will both be music) will be the pivotal point of a stage narrative that will at certain points be enhanced by working with some of the items associated with the legend of the wild boy: the wooden horse, the apples or the mirror.The body and the objects share the same hierarchy. The principle of human intelligence: animism and the difficulty in understanding one’s own identity. The empathy with objects, the personification of things.
We wish to explore how to dance all this, thinking of it as an actual physical place that has yet to be discovered, trying to evade the conventional languages (either traditional or post-modern ones), this is, entering a new and unique universe created for Caspar Hauser.
The music is going to be created at the same time as the choreography: an original score for piano inspired in the
works that Hauser himself played and also in the way he played them, as unpredictable as the way he interacted with the world.

Amongst the references we are taking into account for this project we could mention the novel Caspar Hauser by Jakob Wassermann; the film The enigma of Caspar Hauser by Werneg Herzog; the documents left by Anselm von Feuerbach;
the poem Gaspard Hauser chante by Paul Verlaine; the play Kaspariana by Odin Teatret.