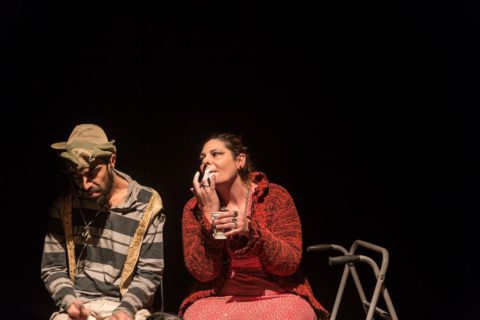 Filipo is a satirized mirror of social cruelty. A stark complaint to the media and individual morbidnes that turns the tragedy of others into a mere show, a banal spectacle. A reallity where everyone has fun with anothers pain. A play where the public is the protagonist and where the tragedy of Filipo is the permanent failure in the search even for death. Filipo poses the infinite complexity of the links between parents and children and between desire and death.

Filipo´s character connects and is fed by great characters who have been objects of a dark power that come out from their entrails and expand toxicly towards everything around them such as King Oedipus, Hamlet, Woyzeck or Roberto Zucco. Filipo being a man of this 21st century, one of the great alienators  of the masses is very present: television. Filipo has choreographies of the purest MTV clips, interviews with certain reminiscences of the morbidity of television programs and television shop ads, among others. This television concept creates a “flash” feeling in the scenes. As if between blinking and blinking the entire plot occurred. Suicide is a vital issue. It is in the field of life and not death. In his constant suicide attempts, Filipo tries to find his role in society. Filipo is a journey to oneself in search of an individual identity that seems lost today.