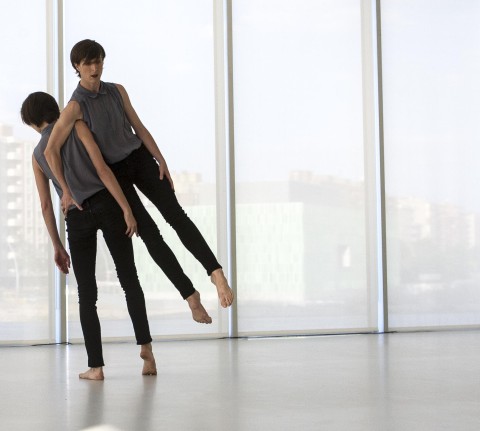 fETCH is a piece that examines and plays with the concept of the alter ego. The alter ego can present itself in the form of a reflection, shadow or even a dream. It is a vessel onto which man projects his or her desires and yearnings for the self. These ideas served as the point of departure for fETCH and enabled the two performers to develop a common choreographic vocabulary. The performers use this language to engage in a game of identity and perception that envelopes both the audience and themselves.


Choreography and Performance: Begoña Quiñones and Mar Rodríguez Valverde.
Duration: 15 minutes
Music: Collage. Edition: Miguel Bellas
*With the support of Conservatorio Superior de Danza M aría de Ávila and Centro de Danza Canal ( Madrid)
Synopsis:
“Sometimes we doubt who we are, the things we do, the decisions we make…Maybe it would be easier to understand that nothing is complete, that we are more than who we perceive ourselves to be and that equilibrium is inevitably unstable.”