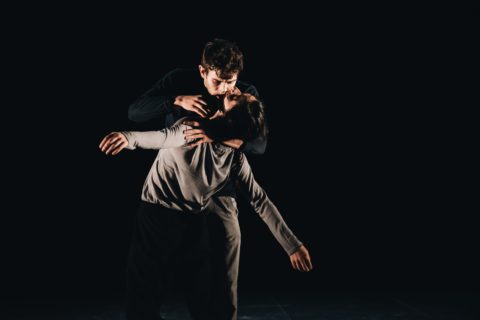 “It Was Almost Two” is presented as a contemporary dance project, striving to tell a story as an event. Through dance and an electronic soundtrack we are trying to stage a cinematographic way of relating what occurred when “It Was Almost Two”.

The main idea of the manuscript unfolds at a meeting where a young man is waiting in a certain place for a woman to show up. They both have very different intentions for each other, and what is about to happen is the result of a previous conflict. Envy, struggle, egocentrism and an illness capable of bringing about loneliness will inevitably lead the two individuals to a physical conversation bound to end in tragedy, a tragedy within an imaginary event.

“Although this brief exchange of words had happened with smiles on both their faces, the threatening look in the young man’s eyes made it clear that standing before her on that evening there was only one thing he could do: murder her.”

“The School of Flesh” by Yukio Mishima.

Musician: This Day In

Carmen and Miguel are independent professional dancers that collaborate with several choreographers and dance companies in Spain. They have worked together under well-known Spanish choreographers, such as: Antonio Ruz, Daniel Abreu, Mónica Runde, Iker Arrue, Dimo Kirilov and Tamako Akiyama, La Intrusa Virginia García/Damián Muñoz and Compañía Lava. They started to develop their own project at a choreographic residency at Centro de Danza Canal (Madrid) in 2013. Since when, their works have been widely presented in Spanish Dance networks and festivals, as well as in some European festivals, like Tanec Praha ...
+ info