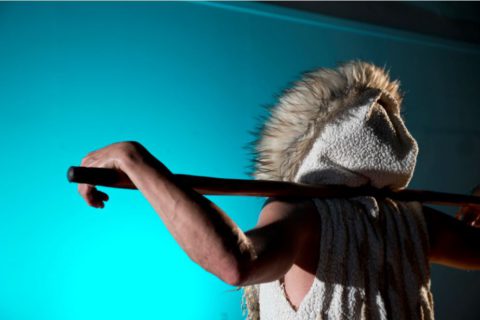 This project arises in times of confinement when the actor, choreographer and dancer Roberto Torres listens to the speech of a Mexican coach who works with multinationals in the United States that shocks him. In this motivational speech, competition is valued, being the best, the one who works the hardest, the best beast, making comparisons with animals that resonate to him as manipulation and danger because at no time in the speech does an “us” appear. This makes him think that in these times we are living, as in other times in history, dangerous leaders arise with truths that without hesitation shout them or embellish them to seduce the meek or to inflame the nonconformists.

In this time of solitude and introspection inhabiting an empty theater: the Victoria Theater, Roberto becomes aware that in recent years he has worked as a performer for other choreographers: Daniel Abreu, Carmen Werner, etc., or he has been directing pieces for other companies or for Nómada Company that he himself directs as in the case of ‘Dulces bestias’ and at this moment, he wanted to take on the challenge of creating this one-man show and see what emerged at this stage of his life, with his experiences, his body and the tools he has been acquiring throughout his experience and training as a dancer.

The piece finds its name: ‘El Pastor’ (The Shepherd) which can be religious, political or literally an animal shepherd, definetly it is a guide of the masses in a time of fear and loss of freedoms where there is a way to motivate the collective, which is from the manipulation. This piece doesn’t want to be ambiguous or abstract, it wants to be direct relying on the word and the movement of the body as a possibility of communication.

‘In moments like the present in which society is fragile, there appear even more visionaries, leaders, coaches and shepherds to guide the flocks. They give speeches with their truths that launch certainties with shouts for the rebellious and seductive for the meek.’