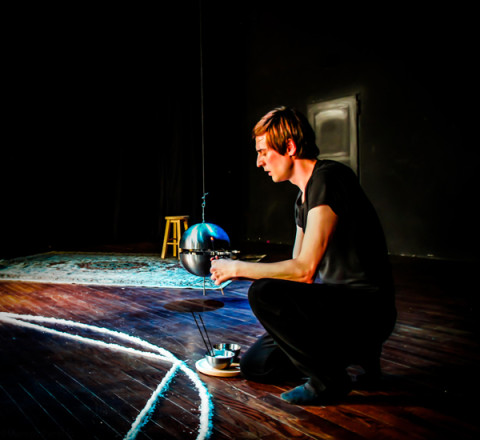 The features that I had created by myself, became to seem beautiful to me.

antioedipus aut homunculus is a performative project based on the rigors of improvisation. The work grows and changes while being continuously confront to the public… until the day of the release (the fixation of a choreography) arrives, so the death of the piece will occur. Still in constant creation and transformation, the piece is never the same, never the same combination of movements, gestures and forms. Its presentation is always accompanied by an open meeting with the public so as to exchange impressions and to receive the feedback and critics that will feed the work again.

The creation and show of ‘antiouedipus’ takes places through the association of different cultural and social structures and platforms, using many diverse management tools and work procedures and finally causing stimulating synergies and joining forces.

…desiring machines only work by ruining themselves…

…dancing with the shadow of oneself seems quite similar to meeting with the other side, with the memories that one has of the death people that has met and with the figurations cultivated about others. Dancing possessed by other entities, by images –which are action beings–, gives the dancer a position beyond his ego, shapes and conscience; he becomes conscience. The dancer disappears and becomes dance, therefore each spectator is able to receive the information according to his or her needs, disposition and willingness.

I am a choreographer, researcher, and performer.  Currently, I am developing a research project —of an epistemological and critical nature— on the arts of movement. Stemming from choreographic and performative creation and conceptually overflowing into different discursive genres and their implementation, such as: writing, performative conferences, work processes accompanied by laboratories and work groups, research group activation and development, seminar development, or the accompaniment of training itineraries in different universities. In my projects, I work with Octavio Mas (lighting and technical direction) and Sabela Mendoza (production and mediation).
+ info