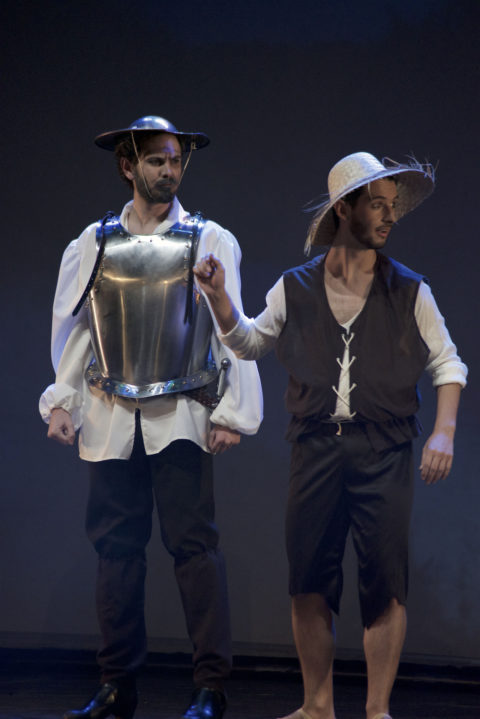 Don Quijote de la Mancha takes as a starting point the Marius Petipa ballet, after a deep analysis thereof and taking as a reference the episode of Don Quijote in which it is based (Camacho’s wedding), a creation with a Castilian essence in the language of the Spanish dance was made.

It is a very narrative work that shows the XVII century Castilian  society, its traditions, costumes (using 400 year old patterns) and of course, dances.

We put on stage styles such as the Bolero School (to keep the ballet’s esence), Folklore (to honour our traditions) and both  Flamenco (Intangible Cultural Heritage of Humanity by UNESCO) and Contemporary Dance which are shown through the  Quijote dreams.

“It’s been a personal need. It is an idea that was in my head for years. I have always had a soft spot for the romantic Don Quixote ballet. I fell in love with it when, at 10 years old, my ballet mistress in the conservatory, Elna Matamoros, recorded a video of the American Ballet version with Baryshnikov and Cynthia Harvey. The more years went by (and i was gaining more knowledge), the more I valued this Petipa’s ballet, a XIX century masterwork and one of the greatest exponents of the Imperial Russian Ballet. However, I missed a different point of view, that moved away from the exotism and romantic idealization, one that showed Castilian XVII century society, its traditions and habits, its costumes, dances, reflecting the diverse cultural Spanish heritage, and closer to the literary work. A version that could preserve the romantic ballet technical virtuosity thanks to the Bolero School language, keeping the Castilian look”. Beatriz Morcillo (choreographer and artistic director of Aire Nuevo Danza).

In a village of La Mancha, the name of which I have no desire to call to mind, there lived Quiteria “the fair” and her beloved Basilio “the poor”. Although in love since their childhood, they couldn’t be together because of her father’s prohibition, who wanted her to marry Camacho “the rich”. Don Quijote and his squire Sancho arrived to this Castilian town.
ACT I: In which is related the adventure of Quiteria “the fair” and Basilio “the poor”, together with other truly droll incidents.

ACT II: Wherein costumes and traditions of the gypsy ethnicity are shown and their importance to help the loving couple’s goals.

ACT III: Wherein don Quijote and Sancho arrive to the proximities of the town where Camacho and Quiteria’s wedding celebrations are taking place, with other strange incidents.

ACT IV: In which Camacho’s wedding is continued, with other delightful incidents.